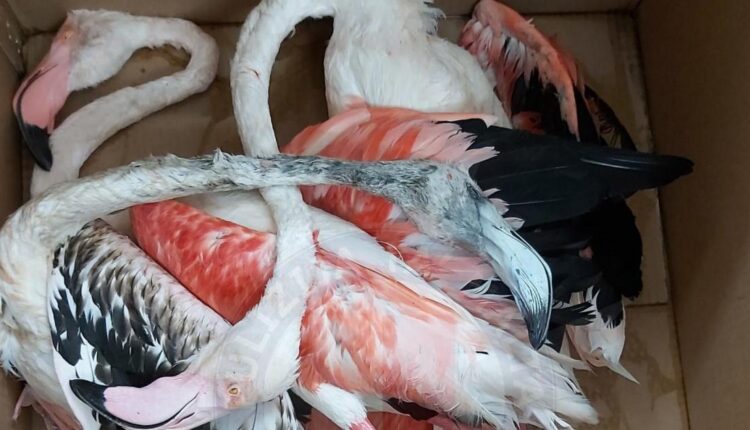 A suspected poacher charged with shooting flamingos over Qawra Point told police that he was aiming at a duck that he was never able to retrieve from the sea.

Miguel Zammit, 23, categorically denied shooting the protected birds he claimed to have observed as the flock of five flew towards Mellieħa on the morning of October 2.

Zammit, a hunter, was caught and arrested after an eyewitness saw four flamingos shoot out of the sky.

Bird watcher Caldon Mercieca combed the area with his binoculars on that rainy Saturday morning. He spotted Zammit on the island off Qawra Point just before he heard gunshots and saw the four protected birds fall from the sky.

Then he quickly raised the alarm.

In a matter of minutes, Nicholas Barbara, Birdlife Conservation Director, reached the area and found a vantage point that gave him a good view of the island.

He turned on his camera and noticed that a “head” bobbed in the water, Barbara said when she testified in court.

It was 7:45 am and as he continued filming through the pouring rain, he called the police.

About ten minutes later, a dark, shirtless man with a shaved head and two distinctive tattoo sleeves was spotted on the island.

It was Zammit, the witness said, adding that the hunter was a familiar face in this Qawra area that birdlife officials frequently monitored to track bird migration and look out for illegal hunting.

The man was talking on the cell phone, “pacing up and down, obviously excited,” remembers Barbara.

As he continued to film these crucial moments, he discovered “something white” in Zammit’s hands and saw the hunter crouching deeply, apparently pulling something.

After briefly losing sight of Zammit, he reappeared with a shotgun and cartridges, said the Birdlife officer, who presented all of the footage as evidence.

“He [Zammit] was the only one on the island “, Barbara replied in the cross-examination of defense attorney Alex Miruzzi.

A sergeant from Qawra Police Station also testified. He was also in the Fra Ben area when officers searching for the suspected poacher discovered a shirtless man in shorts and his head shaved around 8:30 a.m. The man was later identified as a defendant.

The suspect was carrying a Benelli shotgun, ammunition and a bag as he drove towards a Toyota vehicle parked nearby.

He denied shooting the flamingos and insisted that he shot only one duck, which he was unable to retrieve from the sea.

During further questioning, the hunter informed the police that there was a “white boat” in the area at the time of the alleged incident. But he made no further details in that direction.

On cross-examination, the inspector also confirmed that the shotgun had been registered in Zammit’s name and had not been altered in any way.

At the time of the incident, the police had issued a statement that three of the dead birds were found at sea and a fourth on the bank nearby.

But one court only heard of three such birds this week.

Three flamingo carcasses were recovered from an AFM dinghy after they were seen floating in the sea towards Xemxija. Later that day, the dead birds were examined and x-rayed by a veterinarian who confirmed that they had died from shotgun wounds.

Eurydike Kovacs testified about her results and showed pictures of two adult flamingos and one juvenile flamingo with shotgun wounds, bullets and covered in blood when they were brought to her clinic by the police.

The birds did not have tags or microchips to suggest they were raised in captivity, said Stanley Gatt, manager of the ERA enforcement team.

The younger bird was under ten months old while the other two were over 30 months old.

Another hunter who was in the Fra Ben area early in the morning told the court that he was sitting in his van when a police officer opened the door and ordered him out of the vehicle.

Paul Cauchi said his hunting plans were disrupted by the bad weather and that he hadn’t left his van between 5:30 a.m. and the time the police showed up.

“I didn’t have a single drop of water with me, as the police know very well,” he said. Cauchi said he saw no other hunter or bird watcher in the area.

“It rained heavily and there was lightning,” said the witness.

The court is headed by Magistrate Elaine Mercieca Rizzo. Inspector Elliott Magro is under criminal prosecution.

Independent journalism costs money. Support Times of Malta for the Price for a coffee.

The Chipman nomination may be useless, but the battle to protect gun rights is far from over