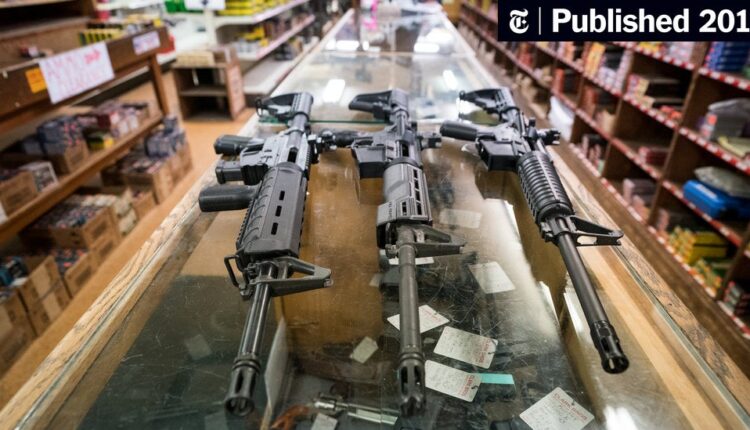 The man accused of the Pittsburgh synagogue shooting, Robert Bowers, legally purchased the guns he used to kill 11 people in what is believed to be the deadliest attack on the Jewish community in the United States, federal authorities have said.

An investigation found the guns were “legally acquired and owned by Bowers,” the Philadelphia office of the Bureau of Alcohol, Tobacco, Firearms and Explosives said Tuesday.

Mr. Bowers did not fall into any category barred from gun ownership under federal law, including felons, convicted domestic violent offenders, dishonorably discharged veterans, or persons identified as having a mental illness or subject to certain injunctions.

He also had a gun license, said an ATF spokeswoman, Charlene Hennessy.

[Read: How variants of the AK-47 and its American response, the AR-15, became the weapons of choice for mass shootings.]

The Pittsburgh shooting has gun control advocates wondering if someone seething with anger and religious hatred should have been able to acquire a small arsenal containing a civilian version of the military’s primary battle rifle .

Among other inflammatory statements he made online, Mr. Bowers, 46, referred to someone who had criticized neo-Nazis as “furnace evaders” and said that “Jews are the children of Satan”.

Hours after the shooting, former President Barack Obama urged people to fight the rise of anti-Semitism, tweeting, “We must stop making it easy for those who want to harm the innocent to get their hands on a gun.”

There are no laws in Pennsylvania that would have prevented Mr. Bowers from possessing the guns, including the powerful assault weapon that was confronted by police who first responded to the shooting.

In 1993, the Pittsburgh and Philadelphia City Councils banned assault weapons within their city limits. But the state legislature responded by passing legislation that effectively repealed the ordinances.

A major push was also made in Pennsylvania this year to pass a so-called red flag law that would allow police or relatives to request a judge to temporarily remove guns from people who pose a threat to themselves or others pose even if you have not been classified as mentally ill.

A dozen states have passed such laws, most after the February mass shooting at Marjory Stoneman Douglas High School in Parkland, Fla., that killed 17 people. But an attempt to do so in Pennsylvania that year stalled after opposition from the National Rifle Association.

It is unclear whether family members or law enforcement knew of Mr Bowers’ anti-Semitic comments on social media or his guns. But gun safety advocates say the nature of some recent acts of violence underscores the need for tighter restrictions on firearms.

“When you combine heated, divisive political rhetoric with easy access to deadly weapons, the possibility of such incidents happening is even more concerning,” said Adam Skaggs, chief counsel for Giffords Law Center on the Prevention of Gun Violence.

President Trump said he believed the country’s gun laws had “little to do” with the Pittsburgh shooting and suggested that posting armed guards at the synagogue could have prevented the massacre.

While authorities have not released any further details about Mr. Bowers’ rifle, the AR-15 is a civilian version of the military’s M16 and M4 carbine, the primary combat weapons carried by Soldiers and Marines.

The difference is that an AR-15 cannot fire in “burst” mode – which fires three shots with one trigger – or in full auto mode, in which the weapon fires until the trigger is released or the ammo runs out. It fires one bullet at a time.

But it’s a powerful weapon: light, easy to hold and fire, with limited recoil, its bullets burst from the muzzle more than twice as fast as most pistol rounds. The standard AR-15 magazine holds 30 rounds and is quick-swap, allowing a shooter to fire more than a hundred rounds in minutes.

The AR-15 and its variants have become the weapon of choice in the deadliest mass shootings in recent years. Congress banned the manufacture of assault weapons in 1994, but lawmakers allowed the ban to expire in 2004.

The power of the gun used in Saturday’s massacre was chillingly revealed in frantic calls over police radios as the killing unfolded.

“We’re under fire, we’re under fire. He has an automatic weapon. He shoots in front of the synagogue,” came a call over the police radio. “We’re being held down by gunfire.”

Authorities said many shots were fired inside.