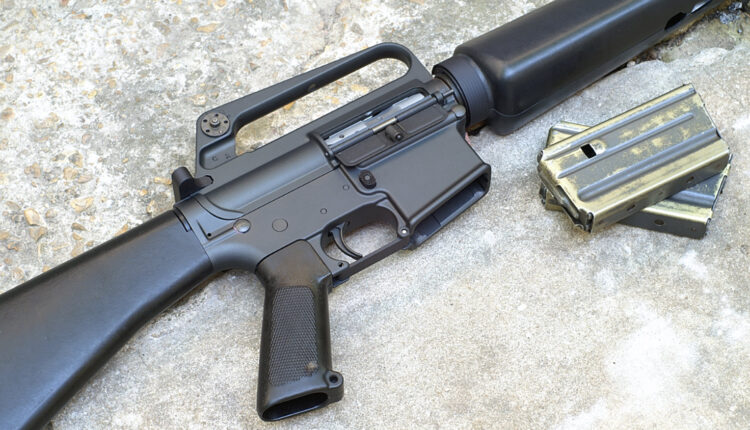 Back in the 1950s, General Willard G. Wyman, commander of the US Continental Army Command, requested the pursuit and development of a .224 caliber round and a rifle to fire it.

Very early on in the Vietnam conflict it was M-14s vs. AK-47s. Respecting serious complaints that the M-14 wasn’t holding its own against the smaller, higher-capacity Kalashnikov, the Department of the Army revisited Gen. Wyman’s concept, which in essence was a magazine-fed, select-fire, 5.56-caliber , sub-6-pound rifle. Ultimately, that led to the AR-15.

There’s a lot that went on between the request for this new rifle and getting this new rifle, and that new rifle eventually was the AR-15 manufactured and sold by Colt’s Manufacturing.

The “AR” in AR-15 stands for Armalite

It wasn’t really Colt that did the AR-15s, it was Armalite. The very earliest guns were stamped “Armalite AR-15” with the Colt’s logo along with it. Here’s how that happened.

Armalite was founded in 1954 as a division of Fairchild Engine and Aircraft Corporation with the impetus to engineer new designs using alternative means of fabrication and also incorporate “new” materials, like high-grade aluminum alloy and plastics, into the production of firearms. Eugene Stoner was their lead engineer. The first success was the AR-5, a little bolt-action .22 Hornet adopted by the Air Force as a survival rifle for flight crews. Originally, Armalite was going after the civilian consumer market; they were not founded with the goal to become a military contractor. Armalite made a few things for sale. Notably, the AR-7 Survival Rifle sold pretty well. It floated, and the disassembled rifle was stored inside the stock.

While with Armalite, Eugene Stoner drew the blueprints for the original AR-15 design—but it wasn’t for an AR-15, and it wasn’t the original idea he had hoped to find success with. That original idea was his AR-10, which as a 7.62×54 mm (.308 Win.) failed to be adopted over the M-14. That was Stoner’s first effort to create a military issue rifle.

Stoner and leading Armalite design engineers, L. James Sullivan and Robert Freemont, went to work for Colt’s. Sullivan and Freemont were tasked with the job of “converting” the AR-10 to 5.56 NATO. Plans for the AR-15 were submitted in 1957.

It’s been around longer than most imagined. But how did it get so popular?

Colt’s submitted a request for BATF approval on October 23, 1963 and the first consumer AR-15 was produced for sale by Colt’s January 2, 1964. For decades, Colt’s was the only option if you wanted to own an AR-15.

In my view, its popularity was made possible some 30 years ago by none other than then-President Bill Clinton. When he exercised a contract clause that said contracted products designed for the military include the intellectual property rights (meaning the design itself), they become public domain. Colt’s Manufacturing lost its contract to produce the M16 in 1988 and the first commercial “clone” (Eagle Arms) showed up a year later. And that (plus time-attrition in patent expirations) is ultimately how Colt’s lost its exclusive on commercial AR-15 production, although they legally still own the “AR-15” trademark (if you’ve wondered why those variously available now are “ Something-Else-15,” there you go). So, the Department of Defense owns the blueprints, and a whole lot of manufacturers have them.

My take on Stoner

Eugene Stoner was not a gunsmith or otherwise schooled in firearms design. He was an aircraft engineer with a radically different background than Paul Mauser, John Browning or John Garand. He had ideas on applying the materials and fabrication standards that were on the cutting edge of aircraft component manufacture at the time. To say that the firearms designs that came from his desk at Armalite were different would be a gross understatement. They didn’t look like conventional guns, and they weren’t built like conventional guns. His AR-10 didn’t make it; instead, it was beaten out by the M-14. The one AR-10 I handled had this (ineffectively) simulated wood-grain plastic furniture set, which clearly was an attempt to soften the objects to its otherwise totally unconventional design. Soon after with the AR-15, Stoner had his ultimate success.

The standout achievement of the Stoner design is that an AR-15 is a collection of components that can be put together to create virtually whatever we want a gun to be. I see it like this—when all the other firearms designers were looking at what Eugene Stoner was doing and asking, “Why?” Stoner was answering, “Why not?”

The preceding is a specially-adapted excerpt from Glen’s book America’s Gun: The Practical AR15. Visit www.buyzedikerbooks.com or www.zediker.com for more information, plus downloads from Zediker Publishing.