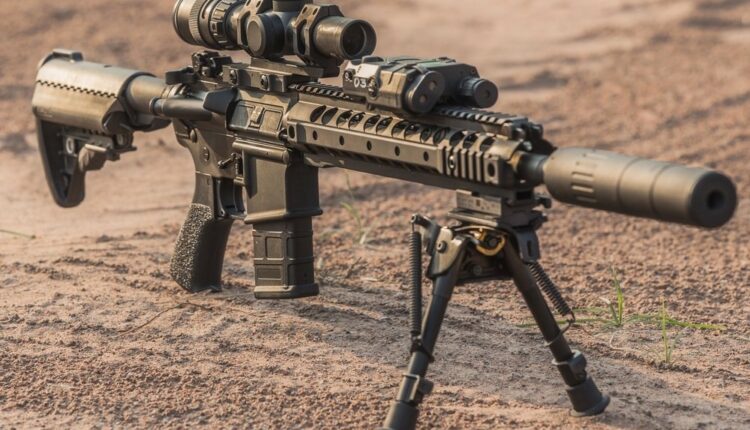 The AR-15: The Best ‘Sporting’ Rifle On the Planet?

Key point: The field of modern sporting rifles – semi-automatic rifles with detachable magazines – has grown in popularity over the past decade. The expiry of the federal ban on assault weapons in 1994-2004 and the wars in Iraq and Afghanistan sparked interest in these weapons. Innovations, partly due to research and development in military small arms, resulted in new and interesting rifle designs. Here are the top five modern sporting rifle designs.

The undisputed king of the MSR movement is the AR-15. The AR-15 is very similar to the M-4A1 and M16A4 rifles used in U.S. military service, except for a minimum barrel length of sixteen inches and the inability to fire in fully automatic or burst modes. Many AR-15 parts are interchangeable with the service weapons, and the civilian AR-15 industry has benefited from Department of Defense and wartime industry research and development and features such as the M1913 Picatinny rail fastening system, optics, polymer ammunition magazines and. even introduced suppressor technologies. The strong growth of the AR-15 market has spawned home industries for rifles in other calibers including .308 Winchester, 9mm Parabellum, .458 SOCOM, and others.

The Ruger Mini-14 was introduced in 1974 and has been around for more than forty years, prior to the commercial success of the AR-15. The Mini-14 is basically an M-14 7.62mm combat rifle that has been scaled down to 5.56mm caliber, resulting in a lighter and handier rifle. In fact, the gas-powered pivot pin drive mechanism was first introduced in the United States in the M-1 Garand service rifle, which eventually became the M-14. The Mini-14 uses detachable ten-, twenty- or even thirty-round magazines and is usually fitted with a wooden stock. Like all modern sport rifles, the Mini-14 is only semi-automatic and cannot fire fully automatically.

In the 1980s, Chinese semi-automatic AK-47 clones hit the streets in America. While imports of Chinese firearms were later banned, the fall of the Berlin Wall and the collapse of the Soviet Union fed America’s strange appetite for this icon of the communist bloc. AK-47s, assembled from excess Soviet, Bulgarian, Romanian, Czech, and Yugoslav parts, became so widespread not only because of their relatively low cost, but also because of their popularity in the broader culture. Unlike Russia, Ukraine, and other countries, which continue to use more modern AK-74 rifles with chambers for the 5.45 millimeter round, American AKs are mostly based on the older AK-47 and AKM designs with the older one 7.62 × 39 millimeter round.

The MR556 was introduced to the American civilian market in 2007 and is the civilian version of the Heckler and Koch 416 assault rifle. Like the 416, the MR556 uses the gas piston operating system, a key difference to the AR-15’s direct impact system. In fact, the system is similar to that of the Mini-14. The result is a rifle that releases dirty gases instead of using them to cycle the rifle, making the gun run cleaner and less prone to overheating. The MR556 is identical to the 416, only the ability to fire burst or fully automatic fire is missing. The US Marine Corps’ new standard infantry weapon, the M27 Infantry Automatic Rifle, is based on the 416.

The Tavor SAR is the civilian version of the infantry weapon that replaced the Galil and M16A1 in service with the Israel Defense Forces. The Tavor is a bullpup design and moves the weapon mechanics and magazine insert backwards, behind the trigger group, creating a more compact weapon. This makes up a 16.5-inch barrel in a gun in a 26.5-inch long package, although the fixed draw length makes it less ergonomic for those with arms shorter or longer than average. The barrel is also chrome-plated and cold forged for durability and accuracy. The weapon is fed from a 30-round magazine, can hold AR-15 sample magazines. The Tavor is also manufactured in nine-millimeter, .308 Winchester, and .300 blackout configurations.

Kyle Mizokami is a San Francisco-based defense and national security writer who has appeared in Diplomat, Foreign Policy, War is Boring, and the Daily Beast. In 2009 he co-founded the defense and security blog Japan Security Watch. You can follow him on Twitter: @KyleMizokami.

‘An Arm and a Leg’: The Insurance Warrior’s Battle Plan