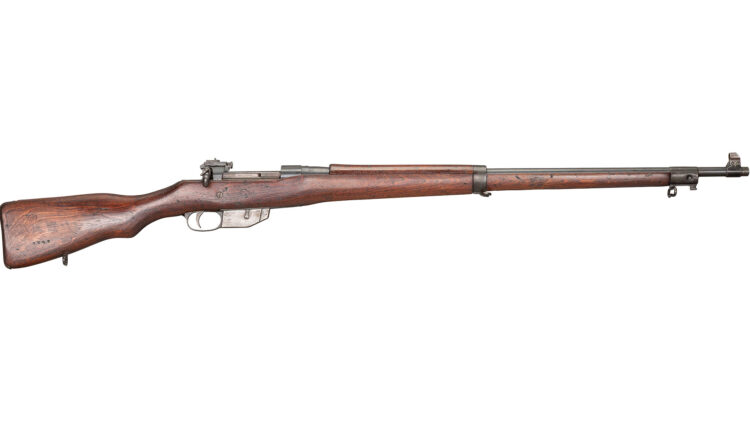 Of all the firearms in the hands of the Irish Republican Army (IRA) during the Anglo-Irish War of 1919-1921 (or “Irish War of Independence”), the Canadian .303 Ross rifle is perhaps the strangest in the IRA inventory. While there were certainly not many Ross rifles in all of Ireland, their proportion in the Third (West Cork) Brigade’s area of ​​operation is remarkable, as there were apparently more of them than any other part of the country. However, the contribution of the Ross rifle to Ireland’s successful attempt to break free from British rule remains a mystery.

Despite being a very accurate rifle, the tight tolerances and design of the Ross rifle tended to get jammed in the ubiquitous mud of the trenches in Flanders. By 1917, most Ross rifles had been withdrawn by the Canadian Expeditionary Force (CEF) and replaced with SMLE rifles. Courtesy of the author, photo by Forrest MacCormack.

The history of the Canadian Ross rifle has been covered in several * articles in recent years, notably those by Brian Sheetz (March 2010) and Bruce Canfield (May 2013) and a recent (2018) “I Have This Old Gun ”video on the * website. Suffice it to say that, despite the awards bestowed on it by some of the rifle’s modern day shooters and admirers, the Ross rifle was considered a burden in the hands of the Canadian Expeditionary Force (CEF) – and certainly in the eyes of the Authority – although it was useful as a sniper rifle.

The rifle was exceptionally accurate, but its “straight pull” action tended to get stuck in the mud of Flanders, and while this was rare, its bolt could be assembled incorrectly – with dire consequences. It was not a rifle that instilled much confidence in its wearers, despite their patriotic pride that it was a “homemade” Canadian design. By 1917, almost all Canadian Ross rifles had been withdrawn from the CEF infantry battalions and then issued to snipers, both Canadian and Allied, or delegated to rear units. 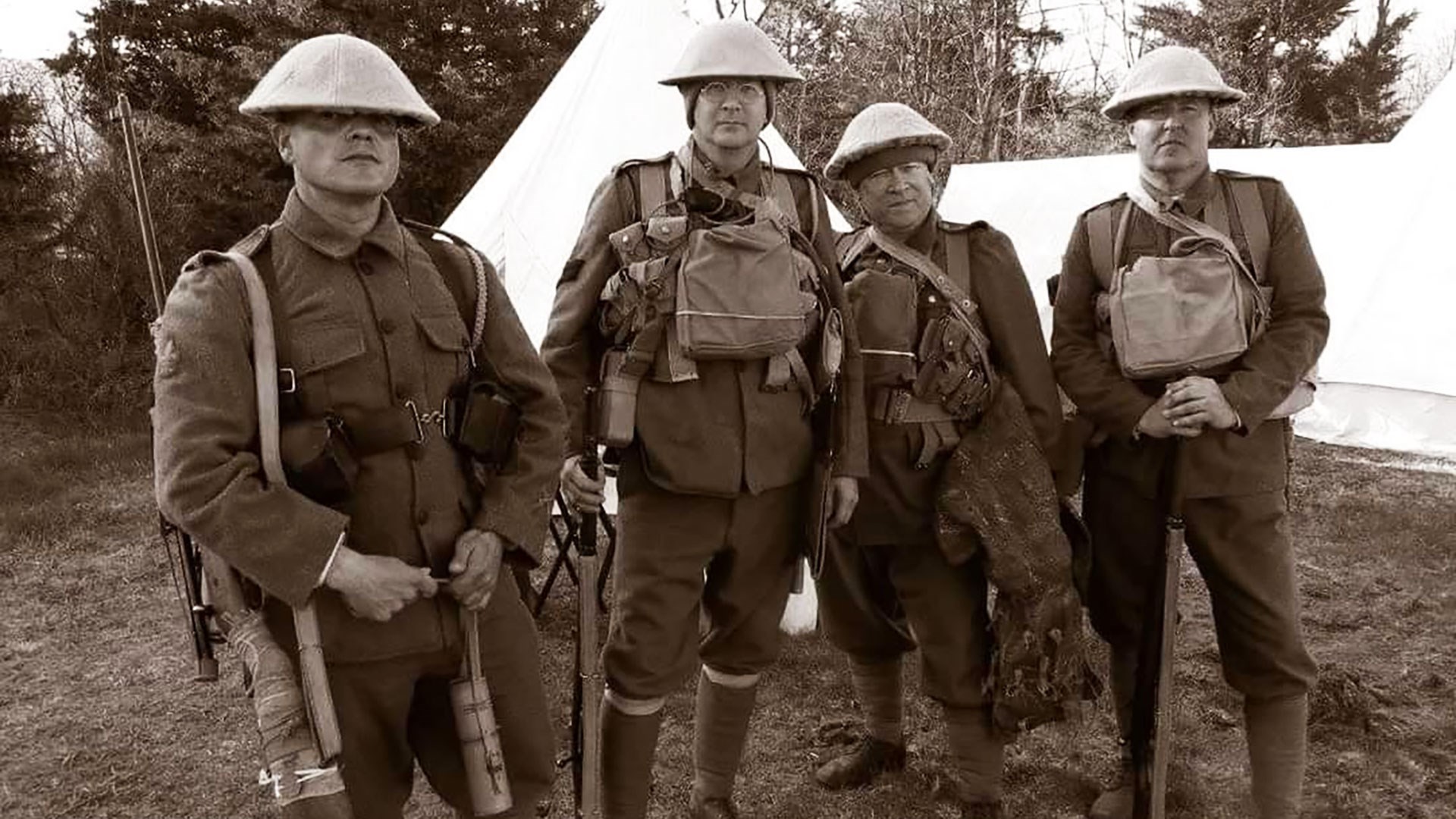 Ross rifles, mostly with telescopic sights, were issued not only to Canadian snipers but also to other allied snipers after 1916. Seen here is a sniper division from the Royal Irish Rifles as portrayed by modern historical performers. Courtesy Jason Harris, photo composition by Robert McDonough.

One of these “rear space units” was the Royal Navy, as rifles on board ships were not as critical as in the front trenches in France. Many of the Ross rifles replaced No.1 Mk III Short Magazine Lee-Enfield (SMLE) .303 rifles on gun shelves on British naval vessels of all shapes and sizes, and the Enfields were sent to the front lines, allowing Canadian infantry to replace their Ross- Guns by Enfields. Six (some reports say 10) of these Ross rifles found their way to the gun cabinet on a small motor launch (ML 171) patrolling Bantry Bay in west Cork in southwest Ireland. The IRA’s local Bantry Battalion knew the rifles were aboard the launch (an 80-foot gasoline-powered ship, also known as a “sloop”) and they were in dire need of weapons. Indeed, the history of the Irish War of Independence depends on the availability and shortage of firearms. 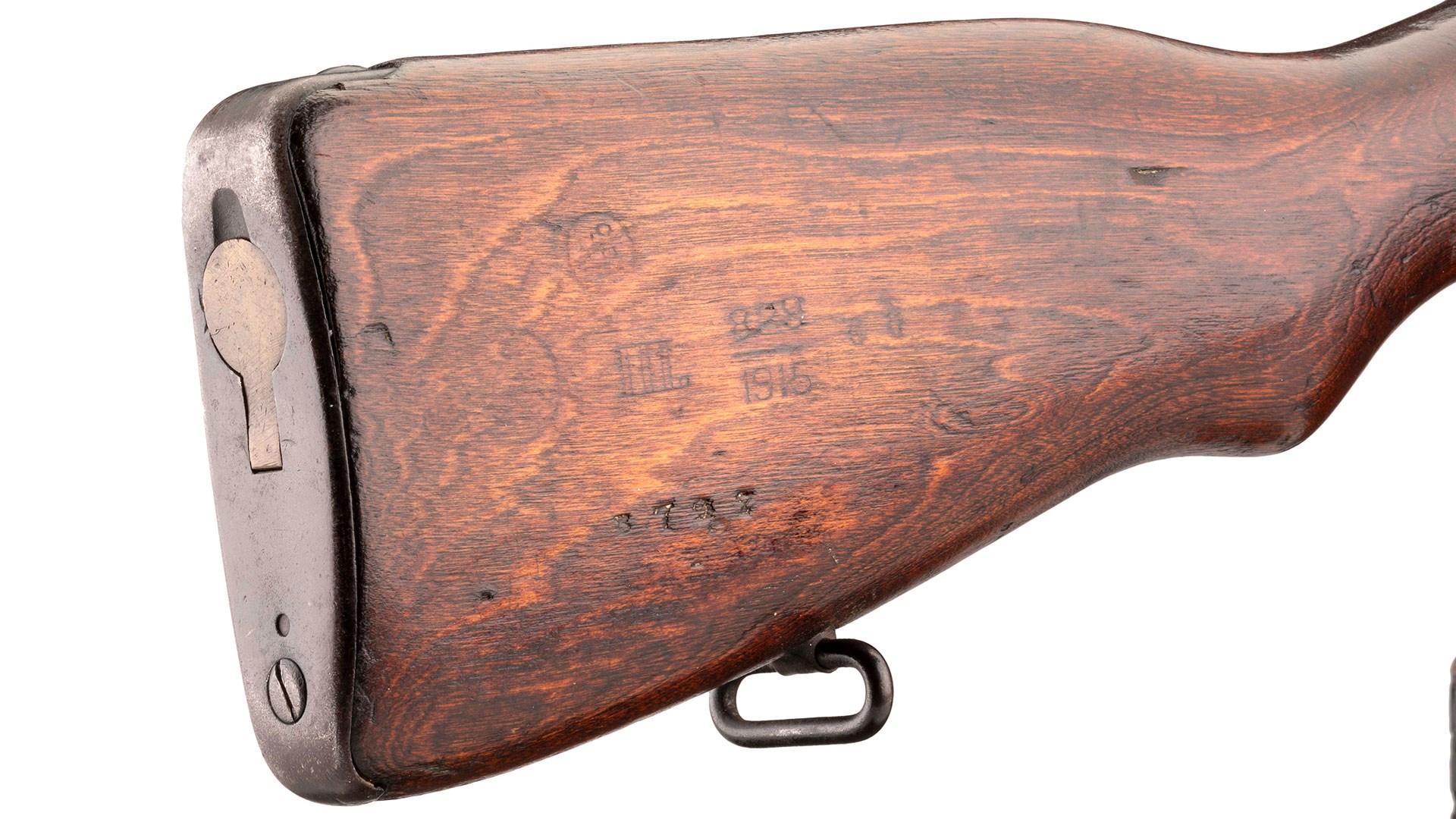 The Ross rifles that were reissued to the Royal Navy and Royal Marines usually bore their original Canadian unit markings. This rifle went overseas with the 29th CEF (“Tobin’s Tigers”) Battalion from Vancouver, British Columbia. Courtesy of the author, photo by Forrest MacCormack.

Guns have been around in Ireland and have been since firearms were invented. In recent years some large landowners kept armories full of military flintlocks and percussion guns (including many blunderbusses) to defend themselves against a “peasant revolt” but in the 20th, or perhaps some big game rifles for overseas trips to Africa or Canada. Some smallholders owned single- or double-barreled shotguns for hunting small game and pests.

Aside from the SMLE rifles in the hands of British troops stationed at scattered posts across Ireland, only the shotguns were in the hands of gentlemen (usually loyalist) farmers and the .303 Brit. P1905 carbine and .455 Webley revolver carried by the paramilitary police, the Royal Irish Constabulary (RIC.), According to a vignette in Rebel Cork’s Fighting Story, 1916-1921: As Told By The Men Who Made It, The three IRA brigades in County Cork numbered about 8,000 volunteers, but only a handful of them were actually armed. All guns, especially rifles of any kind in .303 Brit., Were urgently needed. 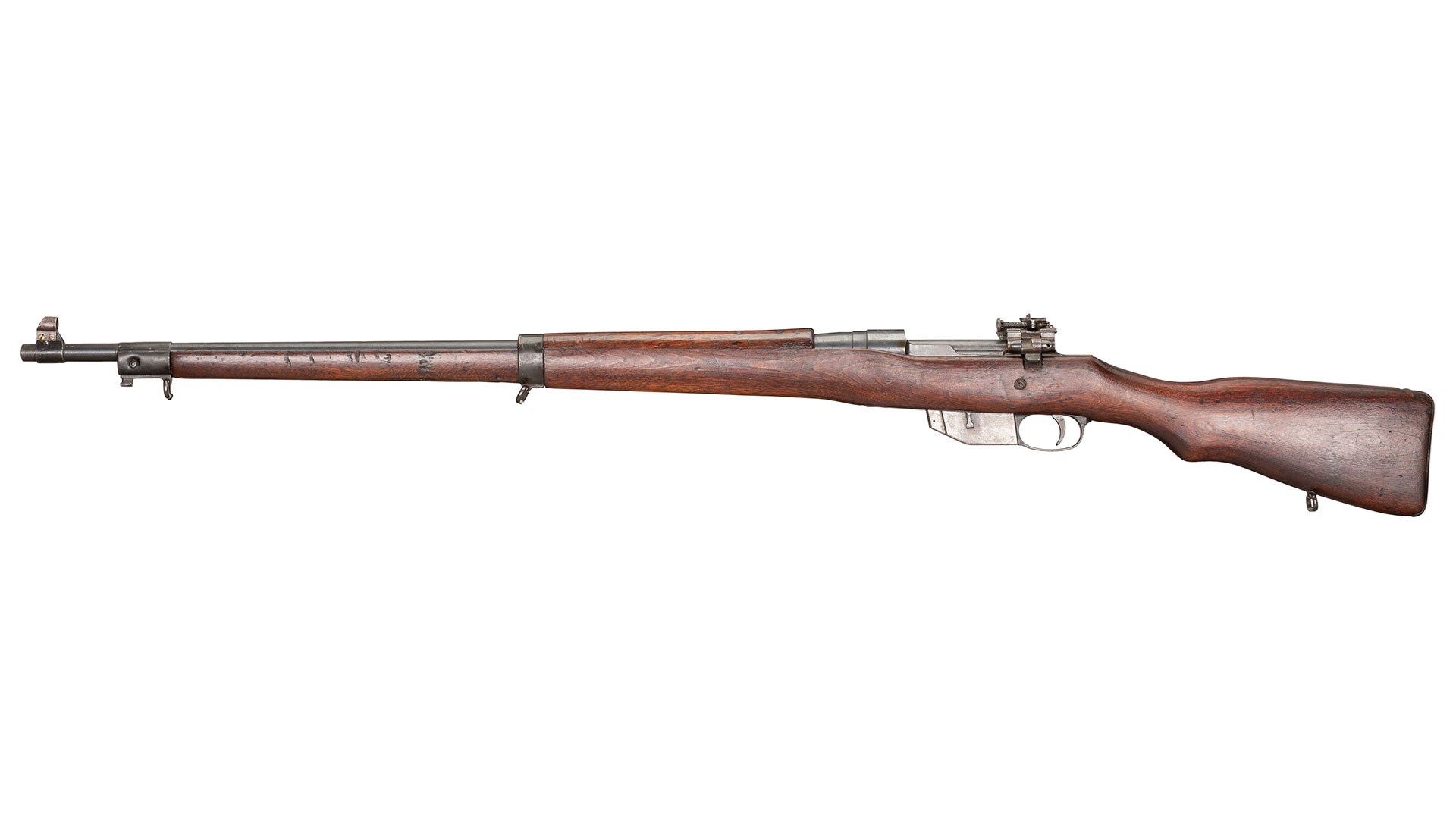 Since rifles of any kind were rare in Ireland in 1919, Ross rifles were tempting targets for the Irish Republican Army (IRA) on board naval ships in ports along the coast. Courtesy of the author, photo by Forrest MacCormack.

On the night of November 17, 1919, a small group of men from the Bantry’s 5th Battalion struck. They had closely watched the activity of the motorboat for weeks, coordinating their attack with the time the ship had moored at the city dock for the night. After overpowering the guards, they successfully made off with the Ross rifles, some revolvers, and a large box of ammunition. The loot was then turned over to the headquarters of the 3rd West Cork Brigade for appropriate distribution after it was hidden in a local church. According to the memoirs of the Brigade’s aide-de-camp Liam Deasy, the Ross Canadian rifles were “a welcome addition to the brigade’s armament. They were well used in many important skirmishes later in the war. “ 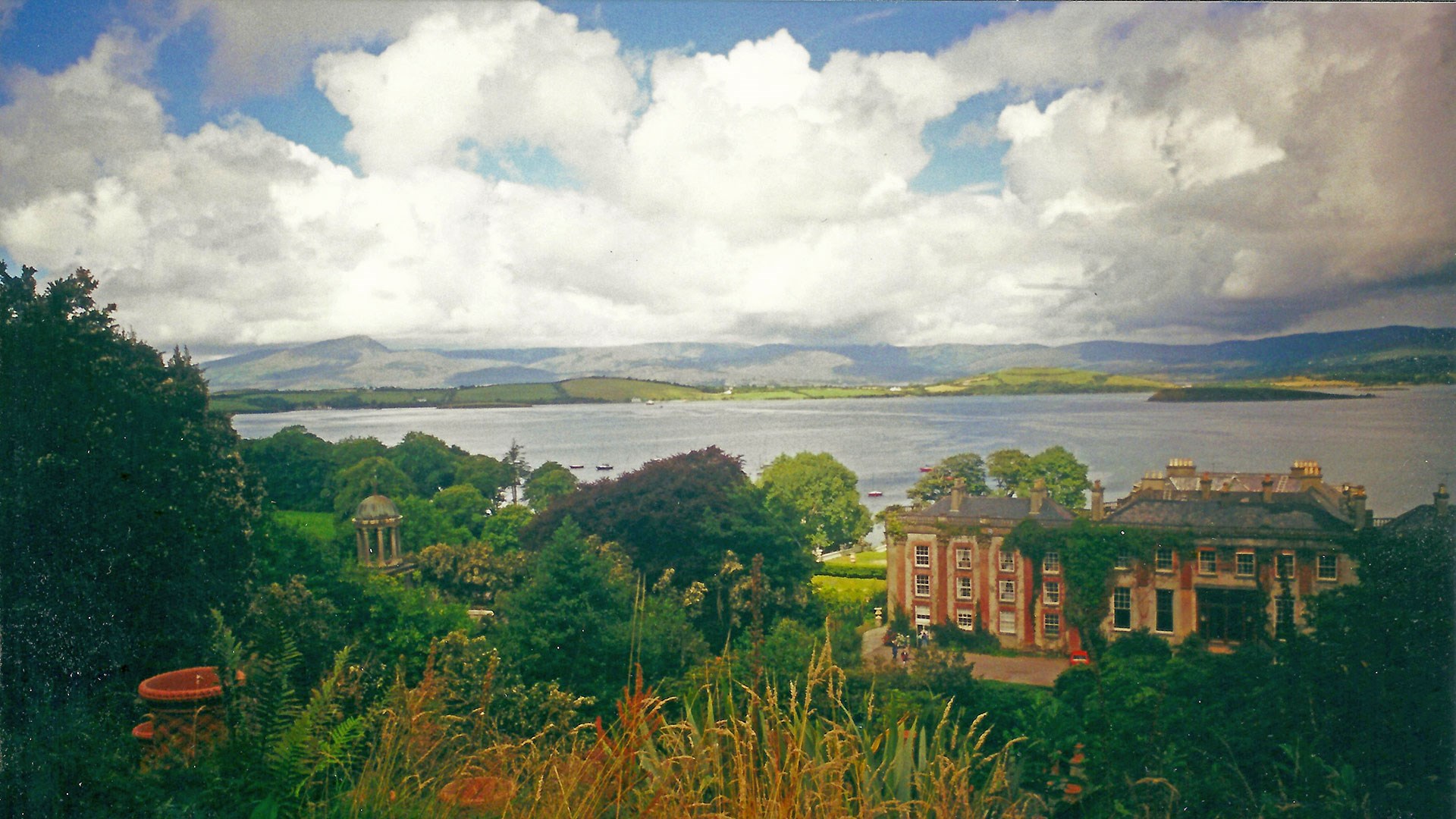 The rugged terrain of West Cork extends beyond Bantry Bay as seen from a mansion overlooking the city and harbor. This was the location of the IRA’s first drop of Ross rifles. Courtesy of the author, photo by Linda Smith-Christmas.

However, the IRA acquired more Ross rifles than this small batch in Bantry. Increasingly, the IRA had begun attacking British government posts across Ireland (using the few weapons it had seized or captured by police), and lighthouses and coast guards scattered in secluded spots along the coast were considered likely by the government Goals viewed. Accordingly, the decision was made to reinforce these coastal posts with Royal Marines, so that in June 1920 the 8th) at the British naval base in Plymouth, England.

The 8th Battalion was divided into small divisions along the west coast of Ireland, from Donegal in the north to Cork in the south. The IRA saw this action as an asset rather than a problem because if those small isolated posts could be filled it would be an excellent resource for the much-needed .303 Brit. Rifles. The IRA had found that coast guards were now being issued Canadian Ross rifles in these previously unarmed coastal facilities (known as “rear area units”). In his book Towards Ireland Free, Deasy gives a good account of the decision to attack these coastal stations in early July 1920 and then records the successive attacks on them in West Cork. 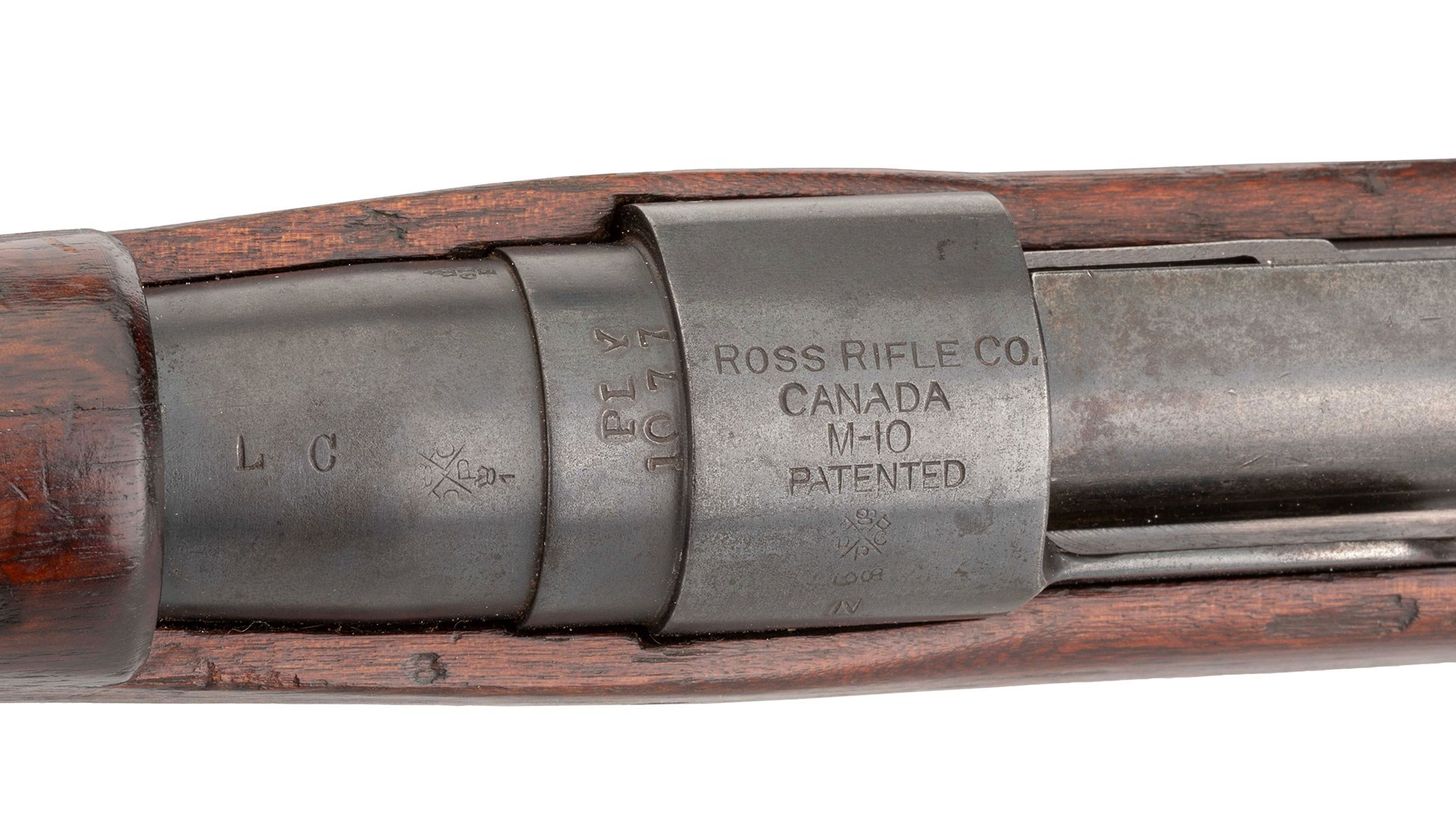 These Ross rifles, reissued by the Royal Marines, bore unit markings. This copy was issued to the Plymouth (PLY) Division of the Royal Marine Light Infantry (RMLI) based in Devon, England. Courtesy of the author, photo by Forrest MacCormack.

The first attack on a coast guard near the village of Ring hit two Ross rifles and nearly 5,000 rounds of rifle ammunition. The IRA then orchestrated another attack on Howe’s beach and acquired more Ross rifles. Eventually, a full blown attack and firefight at the Ballycrovane Coast Guard on July 25, 1920 resulted in the winning of at least 12 (one account claims 19) Ross rifles for the IRA’s 3rd West Cork Brigade. At least one of the IRA attackers was armed with a previously captured Canadian Ross rifle. 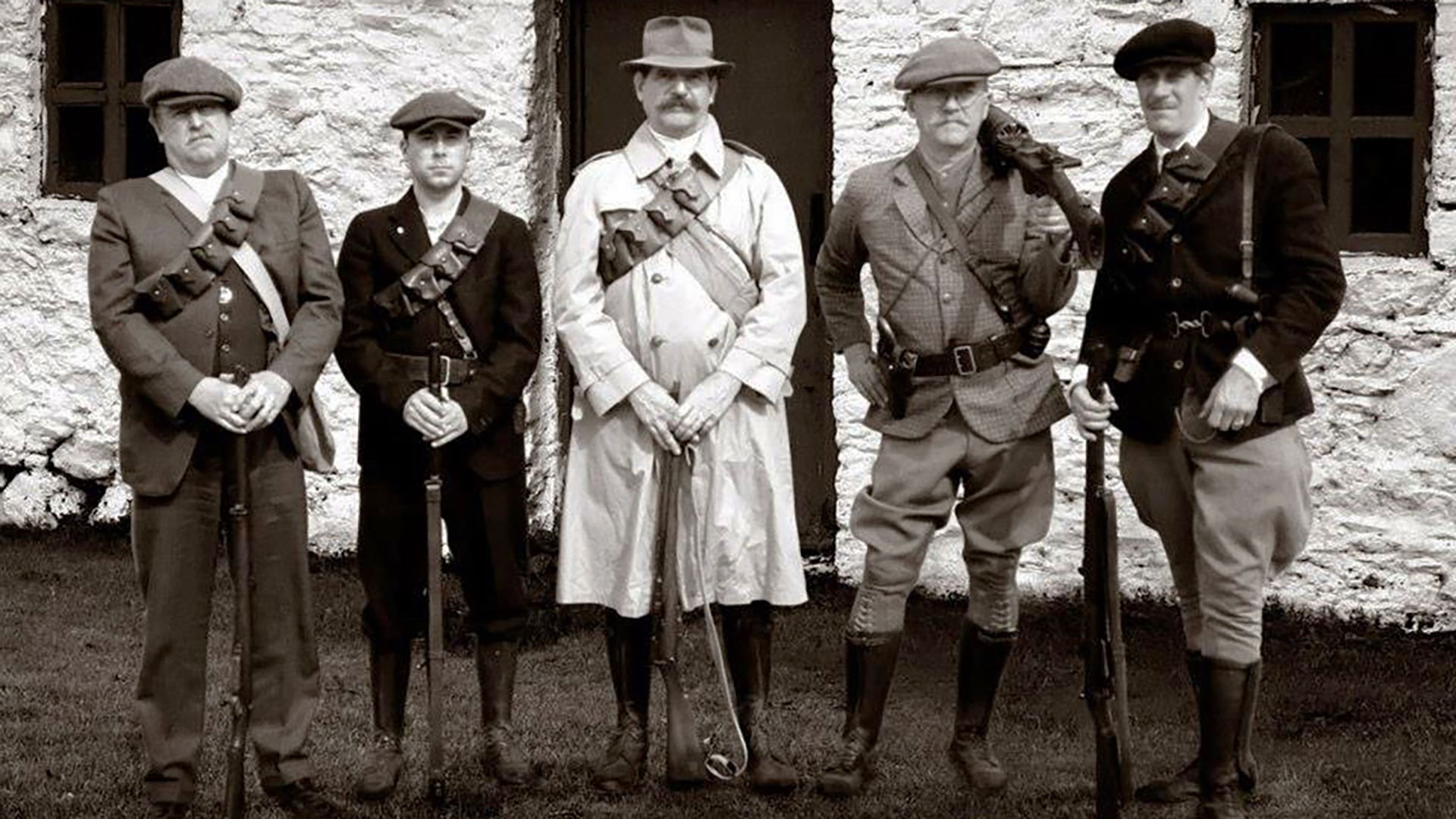 Although armed primarily with shotguns and revolvers in the attacks on the Coast Guard in 1920, the Third West Cork Brigade (portrayed here by modern historians) attempted to rifle all of the volunteers in their “Active Service” Flying Column in 1921 – preferably in .303 . Courtesy Paul Smith, photo composition by Robert McDonough.

Elsewhere in Ireland, on May 21, 1921, the IRA killed and wounded four Royal Marines in an ambush at Ballyvaughan, near Galway, and took their Ross rifles with them. Most likely a few more Ross rifles were lost by Coast Guards and Marines until the July 1921 armistice ended the War of Independence. At least one Ross rifle in Dublin is mentioned in Kieran McMullen’s most recent (2020) and highly recommended book on the weapons of the Irish War of Independence. It must be noted, however, that Ross rifles are barely mentioned in the memoirs left by survivors of these troubled times or in the testimony later recorded by the Irish Bureau of Military History in the post-WWII period. Additionally, none of the rifles appear to be Ross rifles in the photographs available from the IRA at the time. 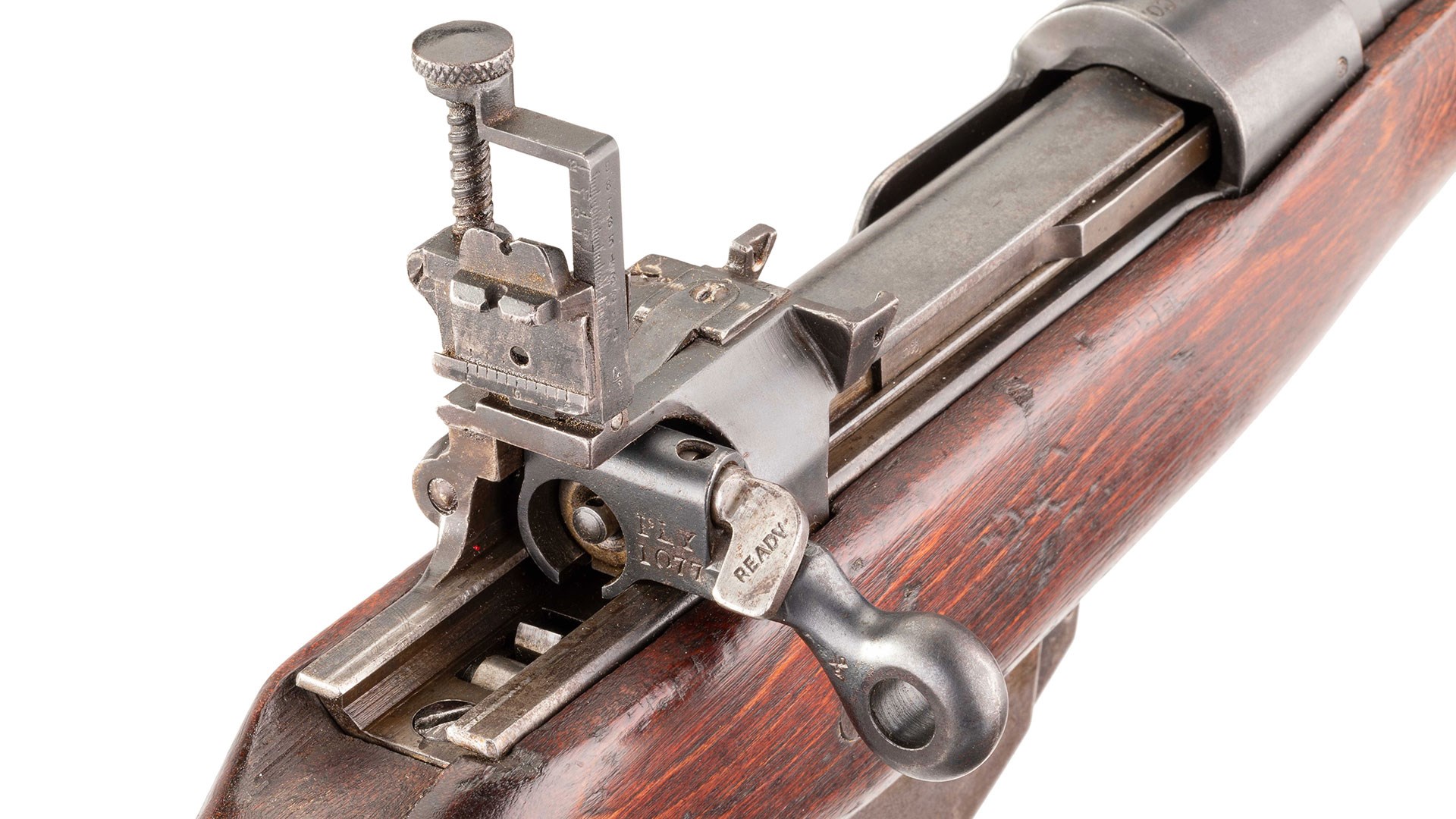 The Ross rifle was very accurate with its iron sights, but this characteristic went unnoticed by the IRA veterans who recorded their memoirs in an oral history program launched by the Irish Bureau of Military History in the 1940s and 1950s . Courtesy of the author, photo by Forrest MacCormack.

From the point of view of a historical gun enthusiast, this is confusing as one would expect some discussion of the virtues or weaknesses of the Ross rifle from participants in the Black and Tan War – especially when compared to the standard Lee-Enfield; For example the various “Marks” of the Short Magazine Lee-Enfield, the outdated “Long Lee” and the RIC carbine. As anyone who has ever disassembled and reassembled a Ross bolt quickly realizes that this is a far more sophisticated (and not very intuitive) task than removing a bolt from an Enfield or Mauser on site.

The ease of a straight-pull action, like that of an Austrian M1895 “Jerk-Zuck” Mannlicher or even an M1895 US Navy Winchester-Lee, is remarkable in comparison to Enfields, Springfields, Mausers or Lebels. However, long after the fact, no one seems to have entered into such a discussion. Part of this may be because, since guns were not a part of Irish culture, no one had any experience with other types of guns or had any interest in “armory”. For them a weapon was simply a necessary tool in order to gain independence. 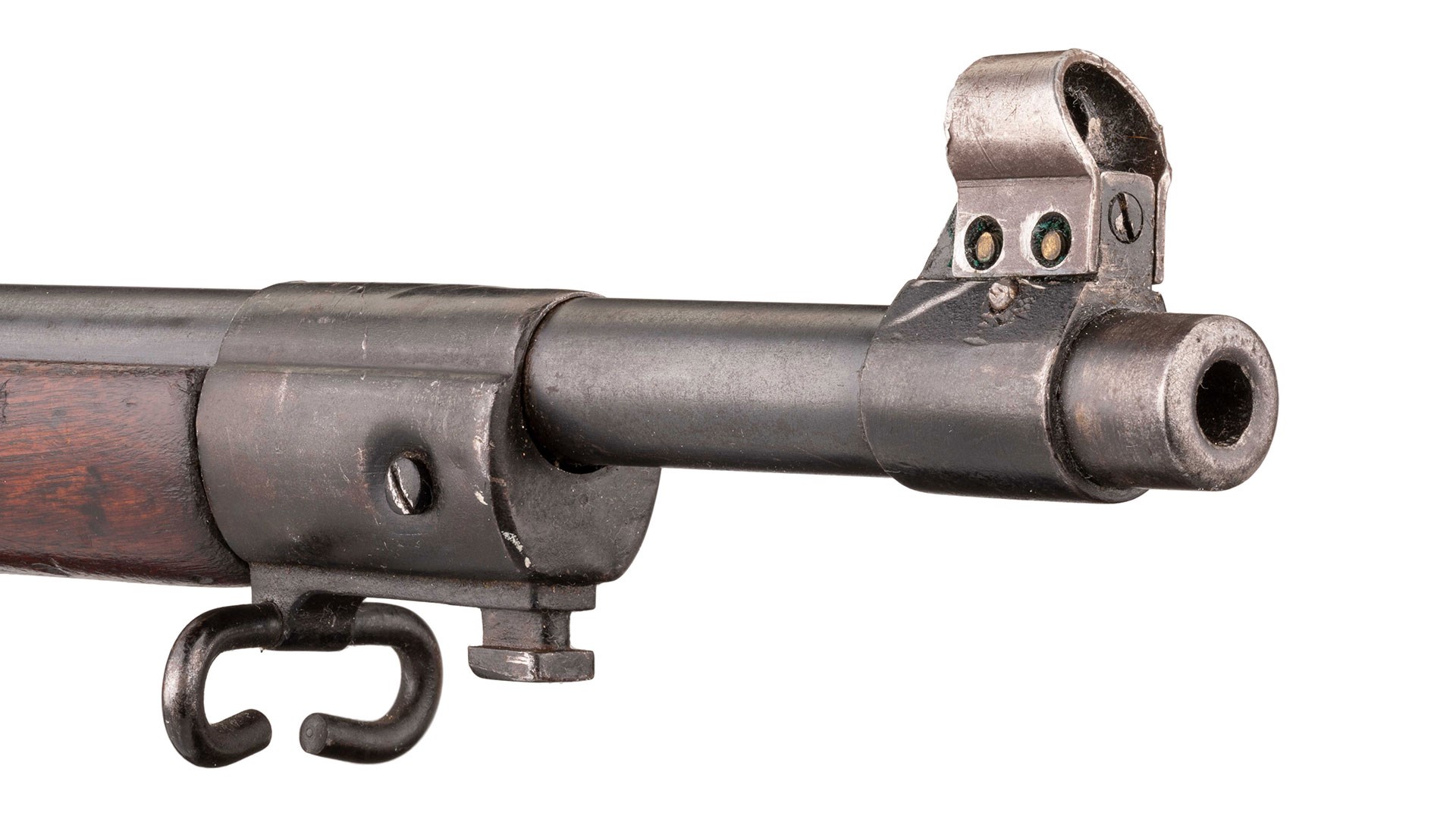 The striking outline, but above all the unique visor hood of the Ross rifle, cannot be seen in any of the available photos of the IRA from 1919 to 1921. Hopefully a keen-eyed firearms enthusiast will spot a Ross rifle in a photo! Courtesy of the author, photo by Forrest MacCormack.

While we don’t know exactly how many Canadian .303 Ross rifles were actually acquired by the IRA and how far they were subsequently used against the “forces of the Crown”, they were there, filling a much-needed void. It is a shame that none of these captured Ross rifles have survived in Ireland, as historical testimony to the role they played in achieving Ireland’s freedom.

The author thanks Jason Harris, Brian McCleaf, Robert McDonough, and Paul Smith for helping with this article.