The Strong Arm of Justice in Sao Paulo, Brasil

A GARRA SWAT team is sent on the mission. A black Chevrolet Trailblazer is mistaken for the darkness of the night and at the same time with the blinding lights of the city of São Paulo. It moves at high speed with three policemen through the avenues of the city towards the zone to check an advertisement in a favela about the sale of drugs and the existence of limited-use weapons in the power of the drug dealers.

At the moment of arrival, the police team had to disembark and continue the search on foot. Since alleys, passages and corridors become 23 inches wide, it is impossible to even use the motorcycles. Entry into these urban labyrinths, where twilight predominates, must be done on foot and with extreme caution. The Imbel MD-97L caliber 5.56 mm rifle cannot be used either. There is no space. Only a .40 pistol has an impact on a showdown.

After a walk of a few tens of meters, a suspicious sighting, the presence of the police and the escape begin. He is hunted and captured, throwing some manure and cocaine on the floor, and money that was in his pocket. The cops see all the action and continuity of a hunt for the suspect who cannot jump over the wall. Caught by the police, he denounces where his buddies are. There are large amounts of drugs, 7.62mm assault rifles, 9mm pistols, and other artifacts.

The cops return to the car with the bad guys. In the ballistic vest, the acronym GARRA leaves no doubt about the forge of the police officers who were involved in this small operation, which, however, caused great harm to the drug dealers. They are the elite and one of the most motivated police officers in the entire São Paulo State Civil Police (CPSPS). They are considered to be the most effective SWAT team in Brazil.

The city of São Paulo, the capital of the Brazilian state of the same name, has been hit by a wave of so-called violent crimes.

As early as the 1970s, the population was tired of living with this fear, and the authorities tried to modernize the police structure in São Paulo. 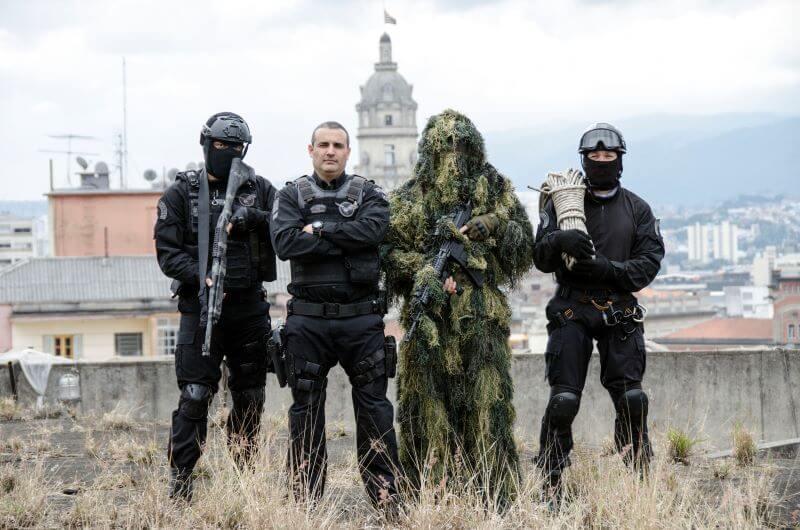 The ideal model used as a reference by state agencies was found in a city in the northern hemisphere more than 4,722 miles away. It was New York that had a motivated, proactive police force that was developing at the same pace as the city. 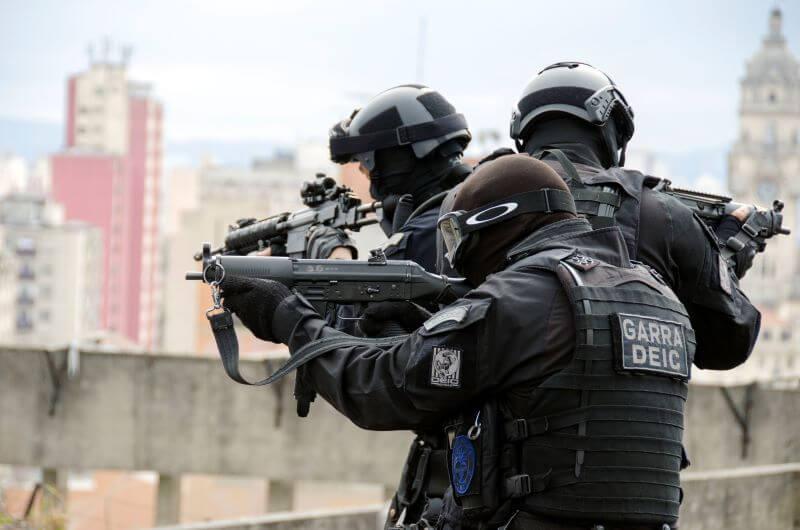 In 1977 26 teams were formed; One delegate each, three investigators and a driver. Each car was equipped with a radio and had direct contact with the civil police operations center.

The group consolidated itself in the 1980s. During the rounds he searched for and arrested wanted criminals and at the same time supported all other units of the civil police in measures to stop criminal and high-risk activities.

It is currently one of the three pillars of the Division of Special Operations (DOE). The DOE, created by Decree No. 59.219 of May 22, 2013, is subordinate to the DEIC and is the civil police’s answer to the most serious crimes. In addition to GARRA, it consists of the Special Reaction Group (SRG) and the Aerotactic Service.

Its structure consists of five operational groups that work in shifts 24 hours a day. Each group (10, 30, 50, 70, and 90) has a chief delegate known as the pilot, their investigators, and their own vehicles. In addition to the task forces, there are also two special groups with motorcycles.

“We also oversee GARRA, which is made up of highly experienced investigators who carry out the intelligence work by analyzing the incidents, investigating the routine of criminal activity, infiltrating the site through campaigns to elaborate detailed reports so that the groups have the full information for the realization of the prisons. This is one of the faces of GARRA, the investigative and secret service work that has a very profound influence on the activities of the group, ”explains Dr. Mario Palumbo Jr., GARRA’s manager.

Investigative and educational work is fundamental and indispensable. In several situations, GARRA police officers, through planning and intelligence agencies, avoided crimes minutes before they were carried out, such as attempting to rob a high-end apartment building, as we will tell below. 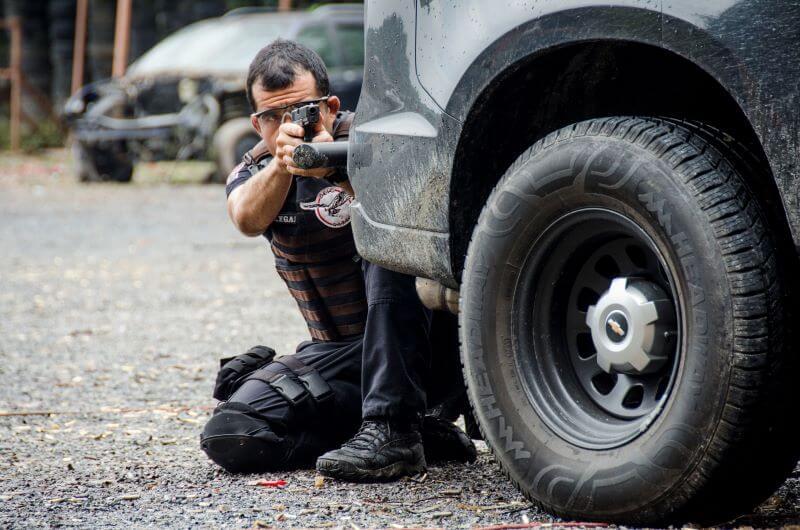 Two vehicles. A luxury SUV was obtained through theft. The other, a popular car with a different chassis number.

Four motorized criminals carrying a 7.62mm AK-47 assault rifle, .45 pistol, and 9mm pistol armament for limited use by the armed forces and police were reunited with four other members of the same gang to split the tasks that day. They also wore a black balaclava, plastic cuffs to be used as handcuffs, ten cell phones, and two HT-type communication radios.

The aim was to raise as much money as possible by attacking a luxury condominium.

Everything was ready. And when the plan seemed to work in advance, the surprise: Without realizing it, the gang was monitored by GARRA police a week ago.

Under the direction of his supervisor delegate, Dr. Mario Palumbo Junior, the head of the company, conducted all the investigations, gathered the basic and routine information of these criminals and planned all the measures so that they were caught at exactly the right moment flagrantly.

Without firing a shot, a specialized band of robbers was disbanded and weapons with restricted use were withdrawn from circulation.

The GARRA is not a place where any policeman works. You have to like it. To be part of GARRA, you must first and foremost be a volunteer. None of his men were transferred to the unit without his consent.

However, this is only the first step and a requirement for any police officer to join this elite unit.

The choice of the supervisor, Dr. Palumbo, who has now worked for 17 years, was carried out after analyzes of professionalism, technology and vocation. He worked in the Special Operations Group for eight years (including its supervisor for one year); In the special operational area of ​​the State Department of Drug Prevention and Repression (DENARC); And went to GARRA in 2011 and has been the group leader since April 6, 2015. 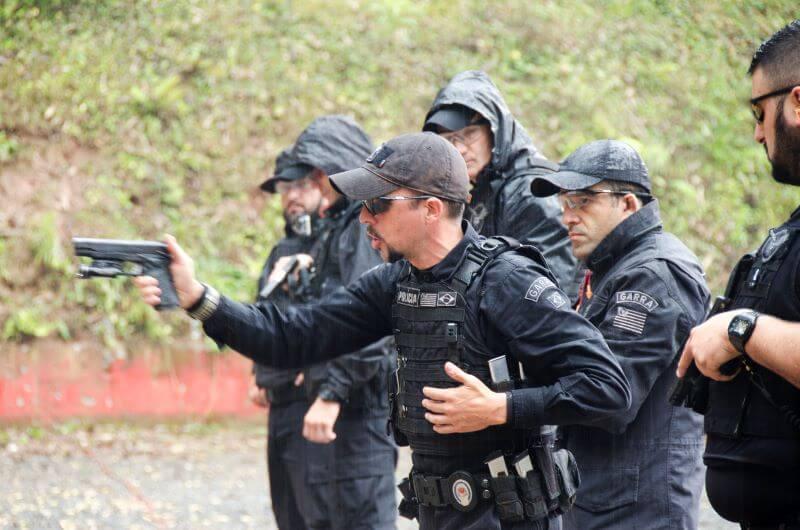 The ability to join a task force like GARRA includes physical fitness, the ability to shoot above average, and being very excited about what he is doing. His cops are at the forefront when it comes to heavily armed and well-trained gangs, and everyone needs to act calmly, even in extreme, high-risk situations. Therefore, the daily events that GARRA interferes with are more severe. Since he is a volunteer and has vacancies, the policeman will be interviewed and, if accepted, will join GARRA with a trial period.

“It is routine that proves to us, and to this policeman in particular, whether or not he is suitable for the functions that GARRA performs. It can happen to him to experience everyday life and to realize that he is not gifted for it. We act to solve the problems, and the police can’t just become a problem in an exchange of fire, for example. In many cases, the police officer realizes that he does not have this ability and asks for a transfer, ”explains Dr. Palumbo.

At the end of the probationary period, the police officer receives special training in order to carry out the various tasks of the GARRA. This includes proper behavior in a ready-to-use vehicle, learning and specializing in abseiling, martial arts (Jiu-Jitsu and Muay Thai) and advanced shooting techniques. “If you do not aim the rifle 100%, the officer is not authorized to operate with this rifle. We have a differentiated discipline. Another point that I would like to emphasize for our police officers and for dealing with the population that needs to be done and educated very well. I’m not giving up on that, ”confirms Dr. Palumbo. 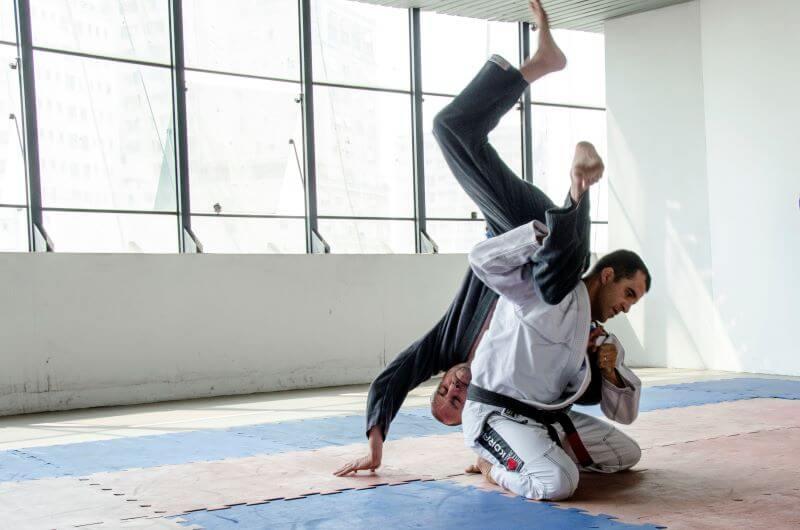 GARRA police officers regularly improve techniques, shots, approximations, and attempt to introduce into their routine the modern equipment and doctrines used by special police services around the world. There are exchanges in other countries. But the techniques are always adapted and modified to the reality of São Paulo and the equipment used by GARRA.

The weapons and equipment of the GARRA

And a task force is not complete without the appropriate equipment and armament.

The GARRA officer basically uses a Level III ballistic vest, with the option of adding ceramic plates to aid in the impact of a higher caliber such as 7.62mm. You have handcuffs, a tactical flashlight, knee pad, radio, glasses and a .40S & W Taurus PT840P pistol. They also have helmets and ballistic shields for invading hostile environments or controlling civil unrest. The support rifles are the 12 caliber models 586.2 Pump Action, Taurus / FAMAE MT-40 caliber .40S & W submachine gun and the Imbel MD-97L 5.56 mm assault rifle. 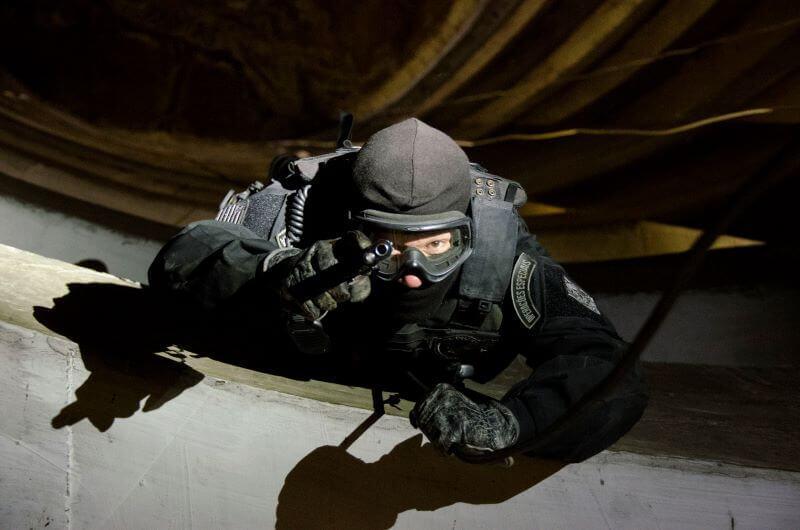 But GARRA follows the progressive use of the gallows and its men are ruled even in human rights politics. Therefore, it is important to struggle with knowledge in order to immobilize a criminal or a person who threatens the integrity of other citizens. The GARRA also uses weapons with low lethality such as elastomer ammunition (rubber bullets), pepper spray, gas bombs, moral and fumigant effect.

Parents raffle off rifle in fundraiser for Florida high school

Brownells donates 2% of sales to the Firearms Policy Foundation