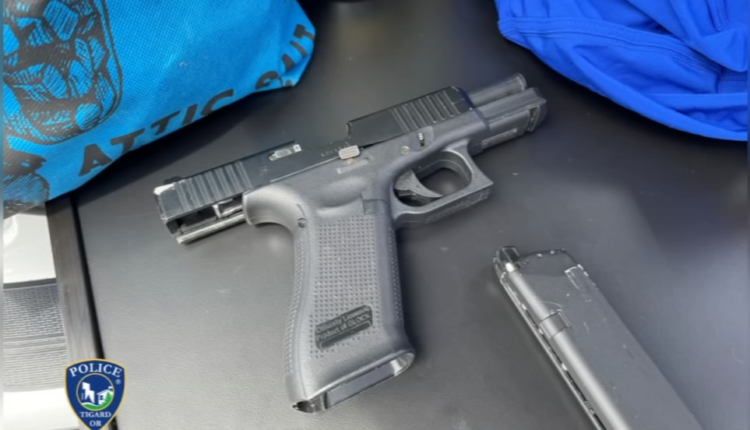 TIGARD Ore. (KPTV) – On Wednesday, a group of kids, ages 10 to 14 years old, were accused of shoplifting at Macy’s at the Washington Square Mall in Tigard. Two teenagers were caught carrying realistic-looking airsoft guns.

It’s suggested to be 18-years-old to buy an airsoft gun but it’s not required. They’re easily accessible at sports stores or online. Police recovered two firearms at the scene and later determined they were airsoft guns. The two boys carrying them were 14 and 12 years old. Nyla Poulson, Tigard Commercial Crimes Unit, says the airsoft gun looks like a GLOCK 45 and there’s no way to tell the difference. From afar, it’s difficult to tell if a firearm is real or fake. You can only see difference up close. Some airsoft guns even have GLOCK markings.

“This barrel looks like a real barrel but the inside is a little different,” says Gabe Stone, Tigard Commercial Crimes Unit.

“The other way to tell also is the magazine that goes into the gun looks different. A real gun you’ll be able to see the bullets and also there’s a little canister right here,” says Kacie Mace, also part of the Tigard Commercial Crimes Unit.

Whether it’s fake or not, police say a firearm heightens a situation and can potentially cause unnecessary harm. Tigard police says flashing a gun whether it’s real or not, is a Measure 11 crime in Oregon and can face prison time.

“He complied with the officers but if he wouldn’t have complied, potentially he could’ve been shot,” says Poulson.

All four kids were caught and the 14-year-old boy is going to a juvenile detention center facing robbery charges.

Tigard police say not to engage with someone who has a weapon and to call 911. If your kids are interested in getting an airsoft gun and you have questions, call your local police department

KHN’s ‘What the Health?’: Closing In on Covid Vaccines for ‘The Littles’