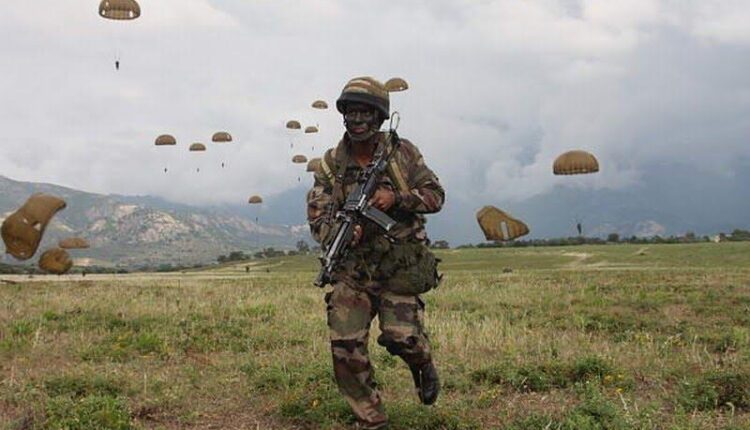 That means you start as a recruit and then you are sent to basic training. The candidate must complete the joint 16-week course in one of the four training depots. The 16-week training is similar to most training in similar units, but has a much faster pace and requirements. During this time, physical fitness is sharpened and basic military skills are taught. During this time, however, the candidate becomes indoctrinated with the traditions of the French Foreign Legion. That means the candidate has to learn the history of the French Foreign Legion, pass the march for Kepi Blanc and learn its songs.

After successful basic training, the candidate receives a Kepi Blanc and is considered a legionnaire. His training is about to start, because the candidate will then be sent for further training in the desired subject. For the future paratroopers, it means

After having passed the basic training, the legionnaire has earned his Kepi Blanc, but then has to continue his education in his specialty. For the paratroopers, this means staying in one of the command training centers scattered throughout French territory, where, along with other metropolitan and naval paratroopers, they will learn the additional skills that set them apart from more ordinary units. At the end of this 6-week course, they do the “relaxing” parachute course and earn their Para-Wings.

After passing the standard course, the soldier goes to a TIS training center. Here, the soldier will be trained in a further 6 weeks in deployment alongside the MSIF, specializing in interface operations. However, soldiers are also trained in basic skills for operations in space and various atmospheric and gravity conditions. This course has sometimes been described as too easy compared to the year British Royal Marines ‘Red Command’ This of course overlooks the different roles of the two entities. A significant part of the RM tasks as ship troops is taken over by the FUVOLMARS of the actual MSIF.

The newly trained legionnaire paratrooper is then sent to his new unit, almost always to one of the 2nd REP holding battalions, where his training continues. Although most will be very proud of their accomplishments to date, the battalions will continue to put them to the test until his new comrades are satisfied enough to allow the soldier to join his front-line battalion without reservation. Since the training in most units is constant and, as part of a Brigade d’Intervention, is usually much more interesting than most units, the REPs have a very good recall rate.

Soldiers of the 1st REP who want to go to the 2nd REP must first pass a tough selection course. In the last few years, this took place abroad within two months. Here the almost fortnightly days and nights combine with the steep terrain and the dangerous fauna to test the legionary paratrooper to its limits. The selection course is usually one that combines strenuous physical tasks with challenging mental tasks. If successful, the two streams, special forces and ruff specialists, are separated and complete six-month training courses before joining the service battalion.

But being part of 2e REP is something special. You will spend your time jumping off airplanes and learning what real brotherhood is.