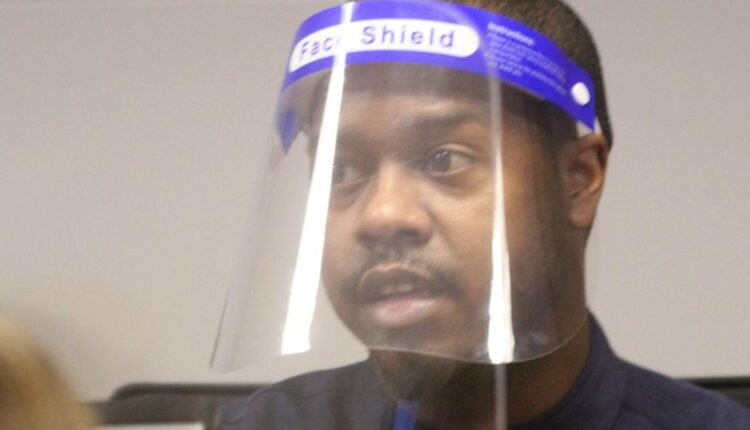 WATERLOO – A Waterloo man accused of staging a synthetic marijuana rip-off that resulted in a fatal shootout denied being involved in a robbery.

Instead, Daijon Jarell Stokes, 28, told jurors on Thursday that he was going to buy milk for his children when he saw his cousin, 25-year-old Cedrick Ordell Smith, in the Kwik Stop parking lot and was so mad at him that he wanted to beat him up.

Prosecutors allege Stokes enlisted Dayton Sanders, 20, and 17-year-old Alvonni Stone to stop Smith when he arrived at the store on West Ninth and Washington Street / US Highway 218 for a K2 deal on Aug. 24, according to the authorities said Smith pulled a gun and started firing when attacked and Stone started firing back.

Sanders shot down Highway 218 and fell into the median and died after being hit by a single bullet, and all of the survivors, according to witness statements, took off before police arrived.

Evidence photo of a .45 caliber Ruger pistol found next to the body of Dayton Sanders after a drug heist on August 24, 2021 on the streets of West Ninth and Washington.


On Thursday, Stokes appeared in his own defense, telling the jury that he had an ongoing argument with Smith, which had almost turned into an argument a few weeks earlier during a candlelit vigil.

He said that on the night of August 23, Stone, Sanders and Sanders’ girlfriend stayed the night with him at his West Fourth Street mansion, where he had a t-shirt press and music studio. He said they went to the Kwik Star the next morning – across from the similarly named Kwik Stop – so he could buy milk for his children and food for Stone and Sanders.

Sanders was driving his girlfriend’s blue Dodge Journey, and he got a call along the way and, according to Stokes, they parked next to a red Ford Fusion at the Kwik Stop.

Stokes said he saw Smith behind the wheel and ran up to him and started beating.

Stokes told the jury that there was no robbery plan and he didn’t know the people he was with had guns.

Video evidence from the store’s security camera captured the attack, with Stone opening the Fusion’s passenger door when Stokes hit Smith in the driver’s side.

The Fusion began to pull forward, and Sanders ran towards the vehicle, which then stopped briefly when Smith began firing in the driver’s seat. The video shows Sanders running away as the merger drove away. Stokes and Stone left the Dodge on the edge of the parking lot to escape on foot.

Stone fired a single shot that appeared to ricochet off the Fusion’s hood, he said.

Officials responding to the scene said Sanders sustained a single through and through gunshot wound. Investigators said they never recovered the bullet that killed him.

Waterloo police said they found a 45-caliber Ruger pistol next to Sander’s body in the median of the highway. The blood-splattered gun had an empty chamber and an empty magazine in it. Sanders also carried a holster that held a loaded 9mm magazine for an SCCY pistol, but not the pistol.

Officers did not find any used .45-caliber cartridge cases at the scene, but they did find three 9mm cases – one near the store’s former petrol pumps and two more next to the Dodge Journey. Two of the 9mm cartridges were fired from the same weapon, Sgt. Kerry Devine testified.

Officer Andrew Tindall told jurors he later found the merger parked behind apartments at 1153 Langley Road. There was a cartridge case and a dent in the hood from a ricochet near the windshield wipers, the officer said.

Meanwhile at the grocery store, the Journey brought an empty plastic box for a Glock pistol, but not the pistol. There was also an inhaler and an LG cell phone.

The closing arguments in the case are scheduled for Friday.

With No End in Sight to Pandemic Life, Parents Find Disruption Is the New Normal