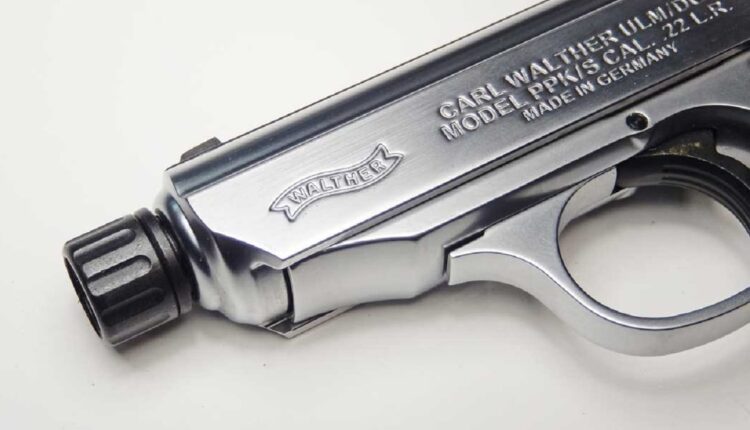 “Do you know what gun this is?” “Walther PPK.” “Only one person we know uses this sort of gun. James Bond.” That snippet of dialogue comes from the 007 film You Only Live Twicein a conversation between SPECTER head villain Ernst Stavro Blofeld (the late great Donald Pleasure OBE) and his crony Mr. Osato (the late Teru Shimada). Although YOTL happens to be my all-time favorite James Bond film, as a firearms aficionado I must nitpick that “only one person” bit, as by the time the film was released in 1967, the Walther PPK had already been in production for 36 years.

And the fine folks at Carl Walther GmbH sporting weapons – the German factory who also produced the Walter P38 Wehrmacht sidearm of WWII – certainly wouldn’t have kept making their most famous product for that long for the sake of merely one customer, even if that customer was Her Majesty’s Secret Service’s best field agent. That said, let’s take a closer look at the pistol that “The world’s most famous secret agent” in turn made famous.

The Walther PPK (Police pistol criminalliterally “police pistol criminal,” referring to the Criminal Investigation investigation office) started in 1931 as a variant of the Walther PP, this time with a smaller barrel, frame, grip, and magazine capacity in order to make it more concealable and therefore better suited to plainclothes or undercover work. A traditional double-action auto pistol with a slide-mounted hammer decocking safety lever, it was chambered in .32 ACP (7.65mm), .380 ACP (9x17mm AKA 9mm Short, 9mm Shortand 9mm Corto), and eventually 22LR.

Even before it became the “James Bond Gun,” this pistol already cemented its place in history as the pistol that Adolf Hitler used to commit suicide in his bunker (unless you’re one of those conspiracy freak types who don’t believe that official story).

Though dr No is the first installation in the canonical James Bond film series, it was actually #6 in Ian Fleming’s best selling spy novel series. Regardless, of all the 007 filmic adaptations, dr No is the one that’s most faithful to the original Fleming book, right down to the scene where Commander Bond is issued his PPK by MI6 Armourer Major Boothroyd (later known simply as “Q”) as a replacement for his previously preferred Beretta 418 .25 ACP (6.35mm). Maj. Boothroyd’s primary rationale – and that of MI6 boss “M” (Admiral Sir Miles Messervy) – for upgrading Mr. Bond’s armament is to improve upon the poor stopping power of the .25 caliber cartridge. The Armorer declares in the book and film alike that the PPK deals out “delivery like a brick through a plate-glass window.”

Alas, Hollywood embellishment once again rears its ugly head here: Bond’s then-new gun is in the .32 ACP chambering – .32 is more popular in Europe whilst American shooters are more partial to the .380 – and any serious student of firearms and wound ballistics knows that .32 and .380 alike are considered so-called “mouse guns,” ie pocket pistol calibers that are certainly better than no gun at all, but do not have the optimal terminal effectiveness of more serious calibers like 9mm Parabellum, .38 Special, .357 Magnum, .45 ACP, and so forth.

Incidentally, speaking of .38 Special, in the dr No novel, Maj. Boothroyd also issues Commander Bond a Smith & Wesson Centennial Airweight double-action snub nose revolver in that caliber, but not only did that wheelmen fail to make it into the movie script, but Mr. Fleming also didn’t bother retaining it in his later novels in the series either.

Those nitpicks aside, the Walther PPK was thusly immortalized for movie audiences, arguably tied with Dirty Harry’s .44 Smith & Wesson Model 29 .44 Magnum as filmdom’s most famous handgun. And cinematic embellishment notwithstanding, the PPK is truly a fine firearm; accurate, reliable—though earlier specimens could be finicky with hollowpoints and therefore were restricted to FMJ “hardball” ammo—and delightfully compact. The double-action trigger is heavy and grating, but then again, this wasn’t meant to be an Olympic target pistol.

In response to LBJ’s arbitrary Gun Control Act of 1968, which banned the import of pistols that didn’t meet certain “sporting” criteria based on size, weight, and features, Walther came out with the PPK/S (“S” as in “Sporting”), which met the GCA criteria by combining the short PPK slide with the larger PP frame. In the movie SkyfallQ actually issues Bond a PPK/S in the relatively more powerful “9mm Short” chambering.

Fast forward to 2005, and Walther teamed up with America’s homegrown Smith & Wesson to produce PPK and the PPK/S under license. Back in 2011, I bought a Smith PPK—naturally electing for the .32 caliber option like a true 007 fan would—and found it to be a fine performer, contrary to the fair share of complaints I’ve heard and read about these newer variants. One major plus about the S&W Walthers is the redesigned and more ergonomic grip tang, which better protects the web of the shooter’s hand from the hammer-pinch and slide-bite that plagued the older models.

Christian D. Orr is a former Air Force officer, Federal law enforcement officer, and private military contractor (with assignments worked in Iraq, the United Arab Emirates, Kosovo, Japan, Germany, and the Pentagon). Chris holds a BA in International Relations from the University of Southern California (USC) and an MA in Intelligence Studies (concentration in Terrorism Studies) from American Military University (AMU). He has also been published in The Daily Torch other The Journal of Intelligence and Cyber ​​Security. Last but not least, he is a Companion of the Order of the Naval Order of the United States (NOUS).