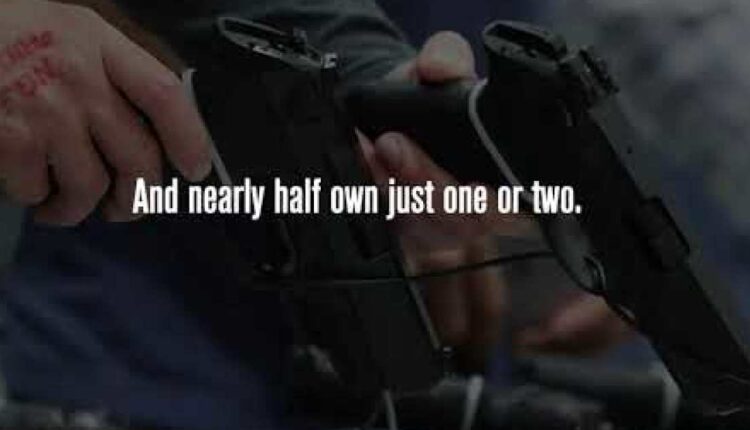 Some men start fishing in retirement, others golf. Not me. Perhaps decades of watching deer frolicking in my garden have subliminally justified this idea. Or the repetition of “The Rifleman” while binge-watching on Saturday mornings. Whatever the reason, I recently surprised my 64-year-old liberal self when I realized I wanted to try a new pastime: shooting.

I quickly learned something: there aren’t many left-of-center gun owners. The connection between guns, God, and conservatism remains a mystery to me, and as I discovered at my first NRA conference, balancing on just one leg of this triad can be stressful.

What better place to buy your first rifle than among the 15 acres of guns and supplies that recently occupied a corner of downtown Atlanta for three days? I know the reputation of the NRA, but I went to the convention with an open mind, willing to question my stereotypes, and hoping to get in touch with gun owners who, like me, think it was high time that the organization is going back to its roots a group promoting gun safety, training and responsible ownership. I was encouraging to hear that 90% of NRA members support universal background checks.

In fact, the participants were a more diverse group than I expected, with the exception of race. Amid the three Bs – beards, baseball caps, and bellies – cute elderly couples walked hand in hand through the showroom; Mother / daughter pairs; even whole families. I met a teacher from Indiana who was pulling her young son around the cavernous exhibition hall in a little cart.

I learned that the Sandy Hook Elementary massacre was the fault of the school itself and the ‘lying’ dirtbag media.

While we were talking, I asked what she had to do, as a teacher and mother of a little boy, with the recent school shooting in San Bernardino, in which a teacher and an 8-year-old boy were shot.

“I understand it can be heartbreaking when your child is killed in schools by someone who shoots. But we are legal gun owners, we are the ones who make the right decisions. “

As for protecting the innocent from those who don’t? “I think someone in the school should have been armed and able to protect themselves,” she said.

Another congress attendee scoffed at the background checks. Also to keep guns out of the hands of the insane? “Who Says Who Is Mentally Ill?” That was a tough audience.

Appearances can be deceptive. Regardless of age, gender, or social class, every person I’ve spoken to has choked up the same NRA talking points: Self-Defense, Don’t-Kill Guns / Kill People, and Amendment 2 Rights. Three of the cutest little old Georgia ladies you could ever meet said that as widows, they often drive alone on country roads. “What if my car breaks down?” asked one rhetorically? “I have to be able to defend myself”

“Is it common in rural Georgia to be attacked in your car?” I asked.

“Well, not as much as where you come from, I’m sure of that,” she said, without really knowing where I came from, but thought I was a big city runabout. The women didn’t believe me when I told them that as far as I knew, such a crime was virtually unknown where I lived.

A common thread among the congress participants I met was fear. Real, real fear. But this is not a coincidence. Protecting yourself from real and imagined crime is what the NRA is all about. The America of the NRA, unrecognizable to the vast majority of Americans other than television, is a very dangerous place. There is lawlessness, crime and violence. Rioters rule the streets. Islamic terrorists are coming to your city. Unarmed women are rape bait. Unarmed men are cowards. It’s dawn in America and no one is going to defend you. Except you.

At seminars I was told not to give my home address on luggage tags, to set up a safe room in my house, to make sure that my gun is so comfortable in the holster that I never go out of the house without it, not even to get milk to go and cover all accessible windows with bulletproof film. I learned that the Sandy Hook Elementary massacre was the fault of the school itself and the “scumbag media”.

Needing some air, I walked a few blocks downtown to watch a small rally by Moms Demand Action for Gun Sense. Flanked by mothers holding photos of their children killed by firearms, Stephanie Stone, an African American from Atlanta, spoke movingly about the death of her 14-year-old son five years ago, who was shot three times in the head in an apartment robbery. Wait a second – I had just seen a scary NRA video based on that exact scenario! Except, of course, that the NRA version teaches that fewer gun restrictions, no more, would have prevented this horror. I then expressed my condolences and asked Stone what she thought of the NRA essentially appropriating its tragic story for its own opposing purposes.

I expected – I wanted – her to express my indignation, but I felt no such satisfaction. Finding that some of the mothers were gun owners themselves, she stated, “We’re only there for some reasonable things,” like waiting times, universal background checks, an end to pawn shop sales. “We have to keep guns out of the hands of the wrong people.”

When I thought about our conversation – gun thefts in her neighborhood, the 18-year-old neighbor who recently bought an AK-47 – I understood a reason for her surprisingly serene reaction: the mothers holding photos of their killed children were probably them the only people I had known all weekend who actually lived somewhere, who even remotely resembled the dangerous America of the NRA, and who could legitimately see a gun at home as necessary protection.

The great, tragic irony is that by supposedly “solving” a crisis that largely non-existent for its members, the NRA is actually contributing to the very real urban gun violence crises that mothers like Stephanie Stone face every day.

I returned home with a new question: can you be a responsible, innocent gun owner who maintains your skills on the shooting range, or just fit in with gun culture and economy, get another gun or two off the assembly line, make me complicit ?

Maybe golf is a better hobby after all.

William Alexander is working on a book about his indoctrination into American gun culture. His final piece for the Los Angeles Times was on the correct use of vous and tu.

All eyes in Washington are on Rod Rosenstein. Does he have what it takes to investigate Trump?