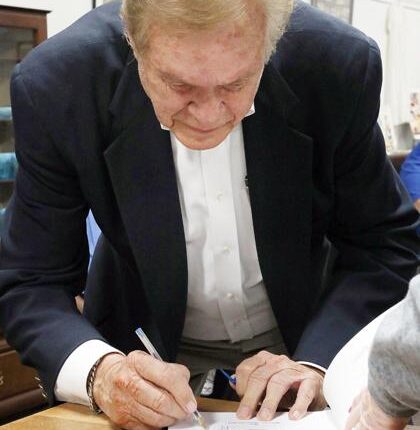 In the early 90s, Wayne Winchester had no intention of buying Jensen Point Overlook, but he was interested in buying an acre and a half of land nearby.

The owner insisted Jensen Point be part of the deal.

“So we reached an agreement and I took that and fell in love with her,” said Winchester. “I still love this place to this day.”

On Sunday, April 18, Winchester presented a slide show at the Franklin County Historical Society in Union, using photos from his book, Jensen Point, Stop and Reminisce, about the history of the Route 66 historic lookout he owned from 1991 to 2016 as a the city of pacific bought it.

Jensen Point, located at 1039 E. Osage St. in the Pacific Ocean, sits high on a cliff overlooking the Meramec River, which is said to have made it a desirable location during the Civil War. Winchester said he believes the 2.8 acre site was used by both the Union and the Confederation during the war.

A sandstone pavilion was dismantled by the Civilian Conservation Corps (CCC) Camp 1770 under the supervision of the National Park Service in the late 1930s, according to the Missourian Archives on site. Winchester once said he showed the pavilion to a group of Chicago architects and “they were intrigued that they were as precise as they cut the stone.” May 30th marks 82 years since the inauguration of this pavilion.

A plaque hung in the pavilion attributes the building to Lars Peter Jensen, according to the Missourian archives.

“I think a lot of people he owned the property,” Winchester said of Jensen. “He never owned it.”

Jensen was born in Denmark, immigrated to the United States in the late 19th century and, according to Winchester, ran the Shaw Nature Reserve for a while. Jensen also helped orchestrate the inauguration of the lookout on May 30, 1939.

“It was a big, big, big thing, especially for a small town like Pacific,” said Winchester.

Previous Missourian reports described that “a crowd estimated at 500 has gathered in the small park” and “marching bands from neighboring towns (that) filled the street … for half a mile in each direction from the construction site as they make their way to the dedication area. “

The men wore ties and the women wore dresses and heels as if they were “all dressed up for church on Sunday,” Winchester said.

“And if you’ve been out there before, it’s amazing how you can get there with two high heels,” added Winchester. “I like being in a pair of tennis shoes.”

Two years after the inauguration in 1941, a memorial service was held at the lookout point, during which Jensen’s granddaughter Catherine unveiled a plaque in his honor.

Seventy-seven years after its inauguration in 2016, Jensen Point reopened to the public after the City of Pacific bought the property from Winchester.

For more information on Jensen Point’s history, see Winchester’s book, available at Gallery 66 and on ebay.com.