Mark Labocettathe longtime vice president for techno sportresigned from the company last week and with a business partner has started up a new.. 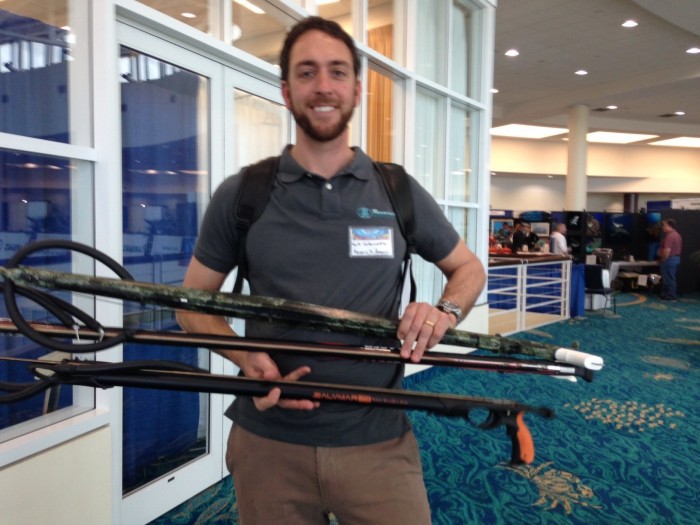 Mark Labocettathe longtime vice president for techno sportresigned from the company last week and with a business partner has started up a new distribution venture called Maverick America.

DeeperBlue.com had a brief chat with mark about his reasons for leaving techno sport — which until this year had been the distributor for Omer‘s line of spearfishing gear but has now been taken over by Aqualung.

When asked by DeeperBlue.com why choose maverick as the name of the new venture, Labocetta says:

“maverick has been a name for a company that I’ve had in my mind for a long time, because I always wanted to start a company that kinda went back to either American production or smaller production, which is what made me fall in love with Omer.”

mark spoke about his lifelong love of the Omer brand, of his father being friends with company founder Valerio Grassi:

“I have a picture of . . . my dad in the background of the original Omer factory in Brescia,” he said, adding: “So there’s a lot of history there. The oldest gunsmith tradition in the world is in that area, and the founder of Omer who’s now 90, Valerio Grassiused to make trigger mechanism parts for Beretta fire arms. That’s how he got into it, into spearguns.”

Labocettawho had been affiliated with the company since the late 1990s, had a first-hand view of how the sport of spearfishing has grown in the US, but with that growth he said the industry “has become much more corporate, production shifted overseas, everything changed, so the whole landscape has really changed.”

What he loved about Omer was “that association with Italy, the small producers that still produce stuff in their factories where you can actually see it’s a reflection of their culture of high-end products, people that make their own stuff, that know what they’re making because it’s them making it, it’s the mindset of the company, of the owner that has the machines producing the spearfishing equipment.”

But with Aqualung taking over Labocetta started thinking about whether he wanted to stay on with the company. During that time he said he started getting feelers from other spearfishing companies:

“I thought OK, you know, one day, I don’t know what’s gonna happen here with this whole acquisition with Aqualungand there were some companies that had contacted me and some opportunities out there, obviously Salvimar what the biggest, and after seeing the production and the way they did things, Salvimar believe it or not is the biggest producer of metal parts for spearguns in the world. They make them for maresfor Cressifor SEACfor Omerthey make first stages and reg[ulator]s for Scubapro other mares. Amazing factory, you wouldn’t even know, because they only launched a spearfishing company four years ago. So they were obviously looking for a US distributor. I was informed that Aqualung was taking over the brand and as much as we tried to negotiate — and techno sport is still negotiating — we haven’t been able to reach something that was gonna be really ideal for both parties.

“So I really knew that with our contract with techno sport Expiring in 2016, in September, I was gonna have to really do some thinking about how I could stay in this industry and I started kind of following along with these brands again, with little brands that make their production here, so I resigned from TechnoSport last week.”

Labocetta has now partnered with Petros Yiannikourosowner of SpearAmerica. Yiannikouros “had really good relationships in place with a couple Greek companies, Pathos and Blue Tech and some other smaller niche brands, so we thought you know, with our knowledge of the industry, just the brands that we know and really appreciate, we really . . . have a fundamental understanding of what makes products good, that are made there, where there are not slips in production because the company is making something that they don’t know how to use in their environment, so we kind of joined forces and we decided to create Maverick America and launch it this year,” Labocetta said.

Labocetta added: “We have a big investor behind us too, and so we think we can carve out a nice niche for ourselves in the spearfishing industry based on my experience and his.”

Maverick America now has a warehouse on each US coast, according to Labocetta.

“The plan is now that we’re gonna host all these great lines – Salvimar, Picasso, C4, and Pathos and Blue Tech and some smaller companies and with those, we have a really nice selection of products all across the board, top quality components, small production [runs],” he said. “We think that with the different niches that these guys occupy, they don’t really step on each other’s toes too much, and we have a nice selection for all of our dealers.”

For more info, check out the new company’s Facebook page.


Did you miss our previous article...
https://galleryforgreatguns.com/manufacturer-news/best-pumpaction-shotgun-field-amp-home-defense-2022