Nearly four years after police say he killed his estranged ex-wife in a Radnor Wawa, Brian Kennedy faced a jury Tuesday to assert his innocence.. 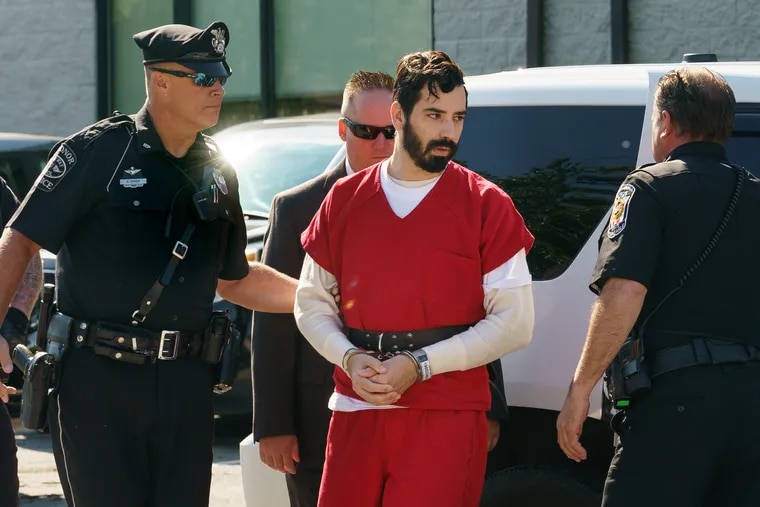 Nearly four years after police say he killed his estranged ex-wife in a Radnor Wawa, Brian Kennedy faced a jury Tuesday to assert his innocence.

Kennedy, 37, attacked Stephanie Miller inside the crowded convenience store in March 2019, luring her there with the promise to drop off their son for their weekly custody exchange, prosecutors said.

He shot Miller multiple times with an AR-15 rifle, they said, as customers and employees watched in horror. Yet, despite the brazen, public nature of the crime, Kennedy’s lawyer, Michael Dugan, said at the start of Kennedy’s murder trial on Tuesday that his client was not guilty as charged.

“I’m not trying to take away from what the family of the victim has gone through, but there is no room for emotion in this courtroom,” Dugan said. “He caused this death, yes, but it was not first-degree murder.”

Prosecutors, led by Assistant District Attorney Matt DeNucci, sharply disagreed, saying there was more than enough evidence to convict him. Kennedy carefully plotted his ex-wife’s violent killing, DeNucci said, buying the gun 12 days earlier and leaving behind a note to his son explaining his actions and saying that Miller had left him no choice.

“Never in my life have I seen a more hateful and cowardly act that took the life of a beautiful woman,” DeNucci said. “What we do in this courtroom will not bring Stephanie back, but I hope to bring some comfort to her family.”

» READ MORE: From 2019: “In Radnor Wawa, 30 seconds of terror: How a years-long custody battle escalated to murder”

Kennedy and Miller, 37, divorced in 2013, court records show. Afterward, tensions between the couple simmered for years, building to the violent conclusion inside that Wawa on Old Sugartown Road.

On the night of the murder, Kennedy and Miller had planned to meet at the convenience store, where DeNucci said Miller felt safe picking up her son because it was a public place. Unbeknownst to her, he said, she was walking into a death trap.

Kennedy had custody of the couple’s son, Norrin, each week from Tuesday through Thursday, and the parents made their weekly exchanges at the Wawa.

Hours before the shooting, Kennedy emailed Miller, asking her to push back their agreed meeting time from 5 pm to 8:30 pm, DeNucci said. She hesitated, but Kennedy refused to compromise, according to the prosecutor, and Miller relented.

In the hours before their meeting, DeNucci said, Kennedy planned one final day with his son. He kept the boy home from school, DeNucci said, and treated him to a dinner at Chili’s, his favorite restaurant.

Afterwards, Kennedy left a farewell letter in which he explained that his son would benefit from a life insurance policy he had taken out on himself, $2 million that would help buy a house for his son.

It was clear, DeNucci said, that Kennedy didn’t plan to return from the Wawa.

As the hour of the meeting drew near, Miller arrived at the store first, the prosecutor said, and Kennedy followed not long after — without the boy. He told Miller he would return with the child, DeNucci said. Instead he went to his car and returned with a gun.

Surveillance footage played in court showed that Kennedy walked into the store, scanned the faces of customers until he found Miller, and opened fire, striking her in the head and chest. He then fled, as quickly as he arrived. Police later said the entire incident lasted 26 seconds.

Teenage employees at the Wawa tested Tuesday that the shooting stunned them. The sight of a man clad in black and carrying a rifle was so unusual, they said, they assumed the gun was fake, and the shooting some kind of elaborate prank.

But it was all too real. And after calling 9-1-1, the teens were easily able to identify Kennedy for police, recognizing him as a regular in the store for the weekly custody exchange.

Two hours later, Pennsylvania State Police troopers found Kennedy suffering from an overdose in his car at a park in Glen Mills. He was hospitalized for several days before he recovered and was transferred to the Delaware County prison.

In the weeks after the shooting, investigators pieced together the couple’s tumultuous relationship.

Kennedy was bitter and frustrated that he only had custody of his son two days a week, and he pushed to expand those rights, investigators said.

Three years before the murder, court records show, Kennedy had threatened Miller inside the same Wawa where he would later kill her. As the two waited in line, Kennedy whispered to his ex to “Get that [expletive] life insurance policy before I kill you,” according to court documents.

Kennedy was convicted of harassment, and Miller applied for, and received, a protection from abuse order against him. But he continued to harass her, she wrote in court filings, trying to persuade her to reconcile and allow him to spend more time with their son.

The protection from abuse order expired in September 2018, six months before she was killed. .


Did you miss our previous article...
https://galleryforgreatguns.com/modern-sporting-rifles/what-the-data-reveal-about-the-monterey-park-and-half-moon-bay-mass-killings